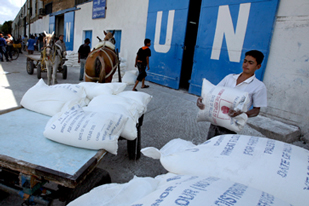 The UN relief and works agency has said it will run out of food within the next 48 hours as the blockade imposed on Gaza by Israel continues.

Christopher Gunness, the agency’s spokesman, told Al Jazeera the people in Gaza were being put through not just a “physical sense pf punishment but also a mental one”.

“That’s how serious it is. We feed 750,000 people in Gaza and these are some of the poorest and most disadvantaged people in the Middle East,” he said on Wednesday.

“Something very unusual is happening here. This is becoming a blockade against the UN itself.”

The blockade, which has prevented deliveries of essential items including food and fuel, was imposed after rocket attacks by Palestinian fighters, who said they were responding to an Israeli raid that killed six people on November 4.

Gunness said the agency was trying to get material into a school for blind children but that it had been barred.

“These blind children, as far as I am aware, are not firing rockets. And the material we are trying to get to them would make a pretty floppy rocket if they tried to make one from it,” Gunness said.

“We have a situation where hundreds of thousands of ordinary people, including blind children who would have been assisted, are effectively being punished for the irresponsible acts of a few.”

He added: “We condemn the firing of rockets. We do it every single time … We cannot punish whole communities. This has got to stop. The blockade against the UN itself has got to come to an end.”Gunness said a team in Gaza was starting a human rights education programme in the run up to the 60th anniversary of the Declaration of Human Rights, but he added that it would be hard telling children to respect people’s rights.

Gunness said the agency had made phone calls and sent emails seeking permission to deliver aid to Gazans, but it was getting no response

“We are told it is not possible … it is difficult … this stuff and the other. This sort of prevarication is leading to misery. A population is being radicalised in the Middle East,” he said.

On Tuesday, Israel partially renewed fuel deliveries to the Gaza Strip, ending a week-long suspension of supplies that led to blackouts in the homes of Palestinian families.

Palestinian workers said the first delivery was received at the Nahal Oz fuel depot and was sent on to Gaza’s only power plant.

The plant shut down on Monday due to what Palestinian officials said was a lack of fuel, leaving about half of Gaza’s 1.5 million residents without power.

An Egyptian-brokered ceasefire that began in June has been disrupted following the imposition of the blockade.

“The cynical Hamas exploitation of the civilian population in Gaza is contemptible,” a ministry statement said.

Kanan Obeid, a Gazan energy official, criticised the move as an example of “Israel’s policy of collective punishment”.

The Gaza City plant provides about a quarter of Gaza’s electricity, while most of the rest comes over lines from Israel. Egypt also provides a small amount.

1 thought on “UN says Gaza running out of food”