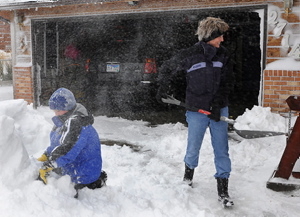 Officials say snow over a metre deep has fallen since Wednesday in the Black Hills area amid reports of howling winds gusting to more than 80 kilometres an hour. The storm has stranded an unknown number of motorists and knocked out power to thousands in the western part of the state.

A lengthy stretch of Interstate 90 has been closed.

Dozens of vehicles are reported trapped, but rescue teams cannot reach the stranded motorists because of zero visibility.

“This is a dangerous storm,” Gov. Mike Rounds told reporters in a telephone conference call Thursday evening. “Western South Dakota is basically under a no-travel advisory.”

“We cannot see a thing in many areas where we’re out actually searching for people,” said Tom Dravland, state Public Safety secretary, adding that the top speed for some rescue crews has been as little as one kilometre an hour.

Dravland said he did not know how many people were stranded. The Highway Patrol has responded to more than 400 calls for assistance, including 10 crashes. No fatalities were reported by late Thursday afternoon.

The storm already has dropped over a metre of snow near Deadwood, in the northern Black Hills. Reports of 25 to 60 centimetres of snow were received from many West River counties.

In some towns, residents reported drifts were blocking their doorways, and in the southwestern corner of the state, six-metre snowdrifts were reported on the Pine Ridge Indian Reservation.

Dozens of schools, agencies, businesses and attractions, including Mount Rushmore National Memorial, were closed because of the snow, which started Wednesday afternoon.

The wind and heavy snow caused many power failures, but repair crews can’t get to the downed lines because of the blizzard, Rounds said. More than 10,000 customers lost power at some point in Nebraska and South Dakota.