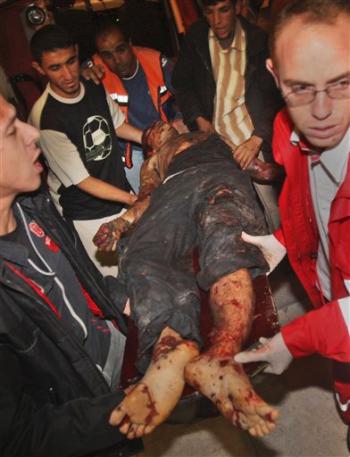 Palestinians carry a man who was wounded in an Israeli army raid, into hospital in Deir El Bahlah in the central Gaza Strip, early Wednesday, Nov. 5, 2008. Israel launched an airstrike on Gaza early Wednesday after its troops clashed with Hamas militants who fired mortars into Israel, leaving six Palestinians dead. It was the first battle since a June truce mostly quieted violence in the volatile territory.(AP Photo/Khalil Hamra)

GAZA CITY, Gaza Strip (AP) – Hamas militants pounded southern Israel with a barrage of rockets Wednesday, hours after Israeli forces killed six gunmen in a fresh bout of violence that threatened to unravel a five-month-old truce that has brought relief to both Gaza and southern Israel.

The clashes began late Tuesday after the Israeli forces burst into Gaza to destroy what the army said was a tunnel being dug near the border to abduct Israeli troops.

Despite the outbreak of violence, both Israeli authorities and officials with Gaza’s Hamas government said they wanted to restore the calm that has largely prevailed over the past five months.

After the Israeli incursion, Hamas gunmen battled Israeli forces and Gaza residents reported the sound of explosions, gunshots and helicopter fire. One Hamas fighter was killed, prompting a wave of mortar fire at nearby Israeli targets.

An Israeli airstrike then killed five Hamas militants preparing to fire mortar shells. Hamas responded with the barrage of rockets.

Hamas spokesman Fawzi Barhoum said the rockets were in “response to Israel’s massive breach of the truce.”

“The Israelis began this tension and they must pay an expensive price. They cannot leave us drowning in blood while they sleep soundly in their beds,” Barhoum said.

The Israeli military said 35 rockets were fired, including one that reached the coastal city of Ashkelon, about 10 miles north of Gaza – underscoring the militants’ growing ability to strike deeper into Israel.

Police said the rocket landed in an empty area and there were no reports of injuries or property damage. However, the army said four soldiers were wounded, two moderately, in the border fighting.

The violence was the worst since Israel and Hamas agreed to an Egyptian-mediated truce in June.

In scenes not seen for months, Gaza residents crowded into hospitals, as ambulances delivered the dead and injured. Grieving militants in military fatigues fired rounds of automatic weapon fire into the air to commemorate their fallen comrades. Over Gaza City, the thudding sound of rockets being fired into Israel was audible. Unmanned Israeli aircraft, often used to target militants, buzzed in the sky overhead.

Israeli rescue services said their teams in southern Israel had been placed on high alert with ambulances on standby.

While Israel and Hamas blamed each other for the violence, neither would say the truce was over.

“We want to see the quiet in the south continued,” said Mark Regev, Israeli government spokesman. “This operation was in response to a Hamas intrusion of the quiet and we hope we won’t see an escalation here.”

Barhoum, the Hamas spokesman, said the militant group was in touch with Egypt to try to restore calm.

Each side has a strong interest in keeping things quiet. Israel has little appetite for a return to the rocket barrages that have made life in southern border towns unbearable in recent years, while Hamas is interested in strengthening its hold on power in Gaza. Hamas violently seized control of the coastal strip in June 2007.

Israeli defense officials said they had discovered a 300-yard tunnel days ago and concluded the passage was to be used for a kidnapping. Hamas already is holding an Israeli soldier that militants captured in a cross-border raid more than two years ago.

The officials, speaking on condition of anonymity because the information was classified, said Defense Minister Ehud Barak approved Tuesday’s operation. Defense officials said they knew the raid could jeopardize the cease-fire, but concluded that Gaza’s Hamas rulers would have an interest in restoring the calm.

The Israeli army said a special army unit moved about 300 yards into Gaza late Tuesday to destroy the tunnel. It said the unit completed its mission and returned to Israel early Wednesday.

The army called its incursion a “pinpoint operation” required because the tunnel posed an immediate kidnapping threat, but signaled it had no intention of intensifying the fighting.

Israel and Palestinian militant groups reached the Egyptian-mediated cease-fire in June after months of indirect negotiations. The deal halted a deadly cycle of Palestinian rocket attacks and Israeli reprisals.

Sporadic rocket attacks on southern Israel have persisted, but the attacks were carried out by smaller militant Gaza groups seeking to embarrass Hamas for preserving a truce with the Jewish state.