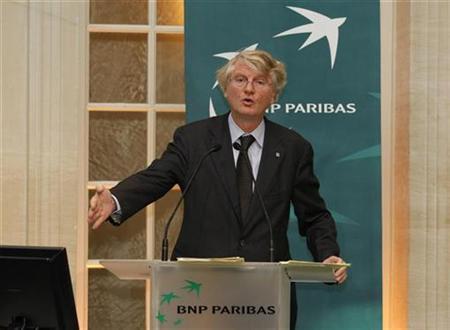 PARIS (Reuters) – A raft of European bank results did little to lift gloom around the sector on Wednesday, with a recurring trend of falling profits and rising bad debts stemming from the global financial crisis.

Capital rebuilding continued in the face of a tough outlook as Royal Bank of Scotland (RBS.L: Quote, Profile, Research, Stock Buzz) looked to raise up to 3 billion pounds ($4.7 billion) from a government-backed bond, and Austria’s Raiffeisen Zentralbank said it may ask the government for 2 billion euros ($2.6 billion).

By 7:15 a.m. EST the DJ Stoxx banking index was down 0.7 percent, led by 4 percent falls for BNP and Allied Irish.

Profits have tumbled across the sector, and several banks have warned of more writedowns and rising bad debts this year, though there is optimism that government rescue packages have left balance sheets strong enough to withstand more losses.

BNP’s falling profit told a tale familiar to many banks nursing the bruises of exposure to collapsed investment bank Lehman Brothers, state-rescued U.S. lenders Fannie Mae and Freddie Mac, crisis-hit Iceland and struggling monoline insurers, but it said it was well placed to come through and grow.

“The bank is not immune to the economic environment,” said Christoph Bossmann, analyst at WestLB.

“The top-line growth is still convincing, as the bank is obviously gaining market share in various businesses,” he said, but added that bad loans would rise in the coming quarters and hurt earnings this year and beyond.

BNP said net profit more than halved to 901 million euros in the third quarter, below analysts’ forecasts, as its bad debt charge jumped to 2 billion euros, four times as big as a year ago.

“Getting back to normal is going to take some time. But we are heading in the right direction,” said BNP Paribas Chief Executive Baudouin Prot.

AIB also said it planned to increase its core tier 1 capital ratio to 7 percent “over time” from a targeted 6 percent at the end of 2008, but without diluting existing shareholdings.

RBS moved to further shore up its capital by becoming the third bank to sell bonds backed by a UK government guarantee.

The dual sterling and euro bonds will be priced on Thursday, RBS said. The bank is likely to raise up to 3 billion pounds, a person familiar with the deal said. RBS shares rose 5 percent.

RBS is already raising 20 billion pounds to rebuild capital hurt by writedowns on toxic assets and its acquisition of ABN AMRO last year. It warned on Tuesday it faces more writedowns and rising bad debts this quarter, which could drag it to its first ever full-year loss.

In Austria, Raiffeisen invited investors to a meeting paving the way to asking the government for up to 2 billion euros.

Switzerland’s UBS AG (UBSN.VX: Quote, Profile, Research, Stock Buzz), the world’s biggest wealth manager, said it was looking at past bonuses, an issue that has disgruntled public and regulators alike, saying its board would consider repaying bonuses already granted.