Ben and Hank have both told you that the critical issue for the economy is for “lending to resume”, stating that it has dramatically contracted.

If this was the truth, then Ben and Hank would have come to you for $700 billion in the TARP, but instead of TARPing the money, they would have asked for permission to use it to capitalize 10 new banks which would be immediately IPO’d off to the public with the stake being in the form of some kind of super-senior debt that held a coupon high enough to encourage immediate (or nearly-so) replacement with private capital.

This would have resulted in an aggregate of seven trillion worth of new lending capacity in the economy, an amount that, incidentally, would allow the full replacement of Fannie and Freddie as holders of housing debt with about $2 trillion left over for credit cards, auto and business loans.

That would have immediately solved the “credit freeze” problem.

So why wasn’t this proposed?

This is the reason: 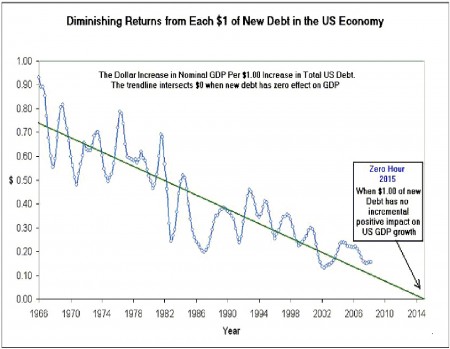 In short, it wouldn’t have done anything because the economy only grows at a rate of about 20 cents for every dollar of debt taken on. That is, it takes five dollars of debt to generate one new dollar of GDP.

The bad news is that once you reach the “$1 for $1” level you are no longer able to finance growth with debt, and it becomes inevitable that you will begin to finance debt with debt.

That, of course generates no GDP at all but precipitously tightens the spiral.

We crossed that Rubicon roughly around 1968, and you have had this fact concealed from you.

The Truth is that we now require about $5 of debt to generate $1 of GDP.

The Truth is that the reason you were not asked to approve $700 billion to capitalize 10 new banks, thereby creating seven trillion in lending capacity is that the economy cannot soak up that new lending capacity; each dollar of new debt generates almost no aggregate GDP.  If this were not true then that would be the logical and effective cure for the ‘credit crunch” – if the borrowing capacity and impact on GDP necessary to help existed.  They do not.

The Truth is that you were lied to about the purpose of the TARP/EESA, because what you were sold was mathematically impossible.  It is supposed to be unlawful to lie to Congress.

The Truth is that the purpose of the EESA/TARP is to rescue the bankers on Wall Street and elsewhere who have made imprudent loans, all of whom are aware of the declining value of a dollar of debt in the economy – a fact they have intentionally concealed from you. The bankers (including Hank and Ben) all know how to do this math, and they are well-aware that the best they can do at this point is to “Rob every dollar you can while the getting is good, and hope they don’t figure it out before you get the cash.”

The Truth is that once you reach a level where a dollar in debt will not support a dollar in GDP you must inevitably either pay down or default that excess debt.  Unfortunately, in this case we must pay down or default approximately 80% of the aggregate public and private debt in the United States in order to return to a standard were $1 in debt will generate $1 in GDP.  Defaulting or paying down less will “turn the clock back” to a degree, but does not change the ultimate outcome.  Only returning to $1 of debt returning $1 or more of GDP, and holding the total level of debt outstanding at or below that level, results in a stable monetary system.

The Truth is that the monetary and banking system is inherently unstable until and unless this is done, and as the “zero point” is approached it becomes more and more unstable, producing more and more violent dislocations.  This is why every crisis since 1968 has been more serious and required larger and more intrusive interventions to calm, including the 1970s/80s energy shocks and inflation crisis, the 1987 market dislocation, the LTCM crisis, the Tech Implosion and now the Credit Bubble/Housing crash.

The Truth is that the absolute worst thing you can do when “in the hole” like this is to spend even more on a deficit basis, thereby driving the debt ratio higher and return-per-dollar-of-debt in GDP lower.  The last eight years have been disastrous in this regard.

The Truth is that the TARP/EESA and other “stimulus” and “rescue” packages, which now total more than $1.6 trillion dollars, have dramatically tightened the spiral depicted above.  The above graph does not include the impact of the Fannie and Freddie rescue nor of the EESA. Both will move the return-per-dollar-of-debt meaningfully lower.

The Truth is that $7 trillion in new lending capacity, if it was put into the market and utilized, might well push the aggregate rate of return for $1 in debt below zero – that is, force it to a negative rate of return.  Ben and Hank know this, which is why they didn’t propose that solution, and why they did not force the bankers (under law) to lend out the recapitalization they provided.

The Truth is that if we reach the point where a dollar of debt has a NEGATIVE impact on GDP The United States monetary system and government will implode.  The reason for this is mathematically obvious – each additional dollar of borrowing beyond that point actually contracts GDP instead of growing it; this is, for all intents and purposes, a “black hole”.  It is that event that has led to the implosion of other monetary systems such as the hyperinflationary implosion of Argentina.

The above are mathematical facts, not my or anyone else’s opinion.

It is your job to safeguard this nation and prevent this outcome, even if you are lied to or have these facts concealed from you by people who know better.

We are dangerously close to that event horizon and your actions are bringing us closer to it, not moving us further away.

Debt that cannot be serviced must be defaulted.  While it sounds counter-intuitive, the “bad mortgages” must foreclose, not be reworked.  All of them.

House prices must fall to no more than 3.5x incomes on a median basis.

Corporate debt (e.g. LBOs, etc) that cannot be serviced under existing terms must be allowed to, and indeed encouraged to, default.

The contraction in outstanding debt that this will produce must occur, and the economic impact that results from it, while painful, is far less painful than a monetary system failure.

A monetary system failure is inevitable if we reach the point where one dollar of new debt no longer supports a positive contribution to GDP.

Again: This is mathematics, not social science or politics.  It is not subject to your or anyone else’s desires or political aspirations.  It is as certain mathematically as is the fact that 2 + 2 = 4.