Russia’s financial crisis is escalating with lightning speed as foreigners pull funds from the country and the debt markets start to price a serious risk of sovereign default. 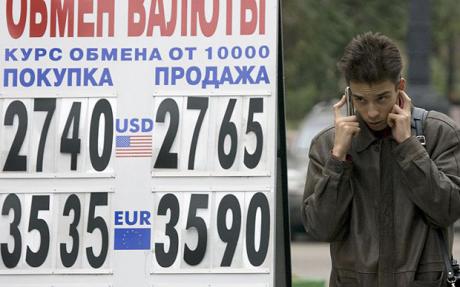 S&P has cut its outlook for Russia, which has been propping up the rouble: a man on a phone passes a board displaying currency exchange rates in Moscow Photo: Reuters

Russia’s financial crisis is escalating with lightning speed as foreigners pull funds from the country and the debt markets start to price a serious risk of sovereign default.

The cost of insuring Russian bonds against bankruptcy rocketed to extreme levels yesterday. Spreads on credit default swaps (CDS) reached 1,123, higher than Iceland’s debt before it sought a rescue from the International Monetary Fund.

Moves by Hungary, Ukraine and Belarus to seek emergency loans from the IMF have now set off a dangerous chain reaction across Eastern Europe.

Romania had to raise overnight interest rates to 900pc on Wednesday to stem capital flight, recalling the wild episodes of Europe’s ERM crisis in 1992. The CDS spreads on Ukraine’s debt have topped 2,800, signalling total revulsion by investors.

Rating agency Standard & Poor’s issued a downgrade alert on Russian bonds yesterday, warning that a series of state rescue packages worth $200bn (£124bn) could start to erode the credit-worthiness of the state.

S&P said Russia’s budget was likely to slip into deficit in 2009 as result of the dramatic slide in oil and metal prices this autumn, and cautioned that “the ongoing concentration of the financial system in state hands” had become a political risk.

Russian companies must roll over $47bn of foreign loans over the next two months, and a further $150bn or so next year, a task that has become close to impossible as investors flee Eastern Europe.

President Dmitry Medvedev said yesterday that disaster could still be kept at bay. “We can avoid a banking, forex or debt crisis and get through today’s difficulties. Russia has not yet got in this difficult situation. It must avoid this,” he said.

Hans Redeker, currency chief at BNP Paribas, said markets no longer believe Russia is strong enough to guarantee the estimated $530bn of foreign debts accumulated by its companies during the break-neck expansion of the oil boom. “The surge in Russian CDS spreads is paralysing the whole system. The government can offer very little help to the banks at this point because its own sovereign debt is in question,” he said.

“This crisis is starting to look like the Black Wednesady in 1992. Unless we see an extension of central bank swaps in dollars and euros to Eastern Europe within days to stop this uncontrolled process of deleveraging, this could get out of control and do serious damage to Western Europe. We could see the euro fall to parity against the dollar by next year,” he said.

Kingsmill Bond, chief strategist at Russian investment bank Troika Dialog, said Russia’s Achilles Heel is the lack of a proper rouble bond market. This had forced companies to raise half their money abroad, in foreign currencies.

“The consequence is that foreign debt repayment has had a dramatic impact. It has led to a scramble for assets and forced selling of good assets in order to raise cash to pay debt. The only way for oligarchs to raise money at present is by selling their equity,” he said. Russia’s “unique fragility” is that over $1 trillion of debt needs to financed from a domestic capital pool of $600bn.

Even so, Mr Bond said Russia is still sitting on over $500bn of foreign reserves – the world’s third biggest – despite losses of $67bn since August from capital flight. “The government still has enormous firepower to solve the problem,” he said.