Bush was probably equally shocked when he found out that invading other countries causes US soldiers to die.

The Fed under Greenspan and Bernanke has caused this mess in the first place.

Ron Paul warned years ago of exactly this financial crisis.

Now the dollar looks good again – and many say all points to deflation, which is a ‘understandable’ misunderstanding – but very soon you will see hyperinflation and the total destruction of the dollar and the US economy. The US are broke and the US will ‘fail’ in the not too distant future – but there will be no bailout. 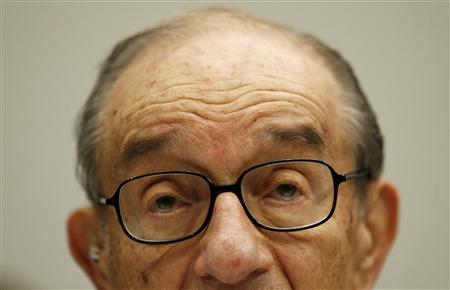 WASHINGTON (Reuters) – Former Federal Reserve Chairman Alan Greenspan told Congress on Thursday he is “shocked” at the breakdown in U.S. credit markets and said he was “partially” wrong to resist regulation of some securities.

Despite concerns he had in 2005 that risks were being underestimated by investors, “this crisis, however, has turned out to be much broader than anything I could have imagined,” Greenspan said in remarks prepared for delivery to the House of Representatives Committee on Oversight and Government Reform.

“Those of us who have looked to the self-interest of lending institutions to protect shareholder’s equity — myself especially — are in a state of shocked disbelief,” said Greenspan, who stepped down from the Fed in 2006.

With a general election looming November 4, U.S. lawmakers were sharply divided along political lines in either blaming regulators or bickering for failure to prevent the crisis that has gripped financial markets around the world.

“The reasons why we set up your agencies and gave you budget authority to hire people is so you can see problems developing before they become a crisis,” Committee Chairman Henry Waxman, a California Democrat, told a panel that included Securities and Exchange Commission Chairman Christopher Cox and former U.S. Treasury Secretary John Snow.

“To say you just didn’t see it, that just doesn’t satisfy me,” Waxman said.

Republicans, for their part, singled out government sponsored mortgage finance agencies Fannie Mae and Freddie Mac for their role in unsettling financial markets and faulted Congress, which has been led by the Democrats since 2006, for failing to pass measures to rein them in sooner.

They angrily protested a decision not to hold a hearing on the mortgage finance firms, which the government took over in September to restore financial health, until two weeks after the election.

Greenspan softened his longstanding opposition to many forms of financial market regulation, acknowledging in an exchange with Waxman that he was “partially” wrong in his belief that some trading instruments, specifically credit default swaps, did not need oversight.

Waxman cited a series of public statements by Greenspan saying the market could handle regulation of derivatives without government intervention.

“My question is simple: Were you wrong?” Waxman asked.

Greenspan said he was “partially” wrong in the case of credit default swaps, complex trading instruments meant to act as insurance against default for bond buyers.

While Greenspan was once hailed as one of the most accomplished central bankers in U.S. history, the low interest rates during his final years at the Fed have been blamed for fueling the housing bubble and eventual crash that touched off the current financial crisis.

His strong advocacy for limited regulation of financial markets has also been called into question as a result of the crisis.

The former Fed chair said that a securitization system that stimulated appetite for loans made to borrowers with spotty credit histories, was at the heart of the breakdown of credit markets.

“Without the excess demand from securitizers, subprime mortgage originations — undeniably the original source of crisis — would have been far smaller and defaults, accordingly, far fewer,” he said.

A surge in demand for U.S. subprime securities, supported by unrealistically positive ratings by credit agencies, was the core of the problem, he added.

Greenspan proposed that that securitizers be required to retain “a meaningful part” of securities they issued. He said that regulatory reform will be necessary in the areas of fraud, settlement, and securitization to re-establish financial stability.

He backed the recently approved $700 billion bailout package, saying that without it, banks and other financial institutions would likely face a serious reduction in credit.

“For too long, the prevailing attitude in Washington has been that the market always knows best,” said Committee Chairman Waxman, a Democrat.

Republicans circulated an October 20 letter asking for a government investigation of alleged fraud and mismanagement at the mortgage firms.

“This is a nice dog and pony show and maybe it’s theater, but people want someone held accountable, they want someone to go to jail,” said Rep. John Mica, a Florida Republican.

But Greenspan told lawmakers that regulators could not predict the future or make perfect decisions.

“It’s a very difficult problem with respect to supervision and regulation,” he said. “We cannot expect perfection in any area where forecasting is required. We have to do our best but cannot expect infallibility or omniscience,” he added.