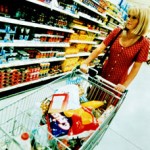 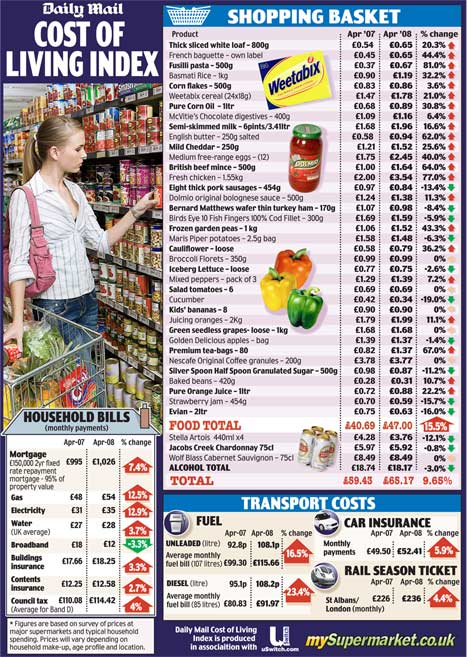 Yet this rate fails to reflect the real problems in homes up and down the country because it includes the cost of luxury items such as flat-screen TVs, whose prices are falling.

It also fails to take increased housing costs into account.

The Mail’s new index has been compiled in association with the price comparison websites uSwitch.com and MySupermarket.co.uk.

It will be published monthly to chart the burden of “must pay” bills as families struggle to keep afloat in the midst of an uncertain economic period.

Gas and electricity are up by more than 12 per cent, adding an average of £100 a year to the cost of keeping the lights on and staying warm.

Increases in train fares, council tax, water and insurance for home and car threaten to tip household budgets into the red.

Uswitch director of consumer policy Ann Robinson said: “We are feeling the strain of food and petrol prices rising at their fastest rate since records began.

“It’s crunch time for UK households as we face a downturn in the economy, below inflation pay rises and the reality of having less money in our pockets.

“We are working harder, but are certainly not getting any wealthier.

“We have less spending money than at any time over the last ten years, yet bills are rocketing.”

Grain and rice prices have doubled in little over a year on international markets, amid shortages which have provoked riots in some countries.

Supermarkets claim they are protecting UK consumers against the worst effects of global food price rises.

However, huge increases are being pushed through in the price of pasta and bread while, because grain is used widely for animal feed, meat prices are climbing.

The organisation’s second inflation measure is the RPI – Retail Price Index – which fell from 4.1 per cent in February to 3.8 per cent in March.

It includes more items than the CPI, specifically mortgage interest payments, rent, council tax and the BBC licence fee, but it relies on the same weighting system.

Economist Andrew Brigden, of Fathom, said: ‘You could certainly argue the CPI understates the cost of living because it excludes housing costs.

“I am sure the ONS accurately measures a representative basket of goods, but the problem is that no one consumes exactly the same basket of goods. For pensioners and others, food is going to take up a greater proportion of spending, but they won’t be buying a lot of flat-screen televisions.’

Help the Aged argues that the official inflation figures are “stuck in fantasy land”.

Special adviser Mervyn Kohler said: “Pensioners are bewildered that the official inflation rate is plodding along at a benign rate when the things they need to buy are rising at a much faster pace.

“The income of the pensioner population is very modest. They are much more affected by what happens on food and energy than things like furniture or plasma TVs, which may be falling.

“That goes nowhere near matching the higher bills. Household budgets are going into the red.”

AA spokesman Luke Bosdet suggested the £5 gallon of unleaded – 110p a litre – would become commonplace within a matter of weeks.

In theory the cost of mortgages should be coming down following cuts in the Bank of England base rate.

However, the reality is that many deals are are going up as mortgage firms cover their diminishing margins in the face of the credit crunch created largely by their own risky lending.

Fixed-rate loans are considerably more expensive than a year ago, adding hundreds of pounds to annual outgoings.