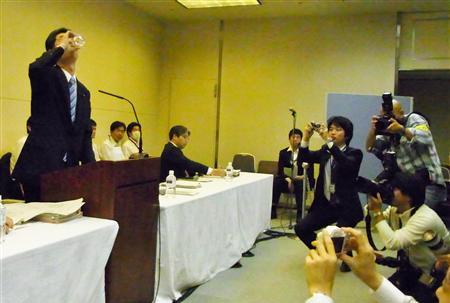 Yasuhiro Sonoda, 44-year-old official in the Cabinet Office, made good on his promise and drank the treated water from Reactors 5 and 6 basements. Iodine-131 and radioactive cesium were ND (not detected). If TEPCO’s analysis of the water the other day is correct, there is no alpha nuclide, but with a good dose of tritium (H-3).

The Japanese government is good at proceeding fast with totally meaningless performance, and the Japanese media is good at reporting it.

According to Sankei, the water was taken from the storage tank of treated water on October 22, and it was boiled to remove any bacteria.

Someone asked Sonoda in this press conference, “Is there anything that you do that has made progress?” (as tweeted by Ryuichi Kino, independent journalist)

– AND NOW: 110 Volunteers and Residents to ‘DECONTAMINATE’ High Radiation Area in Fukushima City