I told you many times that deficit spending by the US government and quantitative easing by the Federal Reserve are exactly the best policies to destroy the middle class (and of course the poor), the dollar and to bankrupt America.

Americans never had a choice every administration consists only of members from the Council on Foreign Relations, the Trilateral Commission and the Bilderberg group:

George Carlin gets right to the point:

That is the change you voted for and Obama bin Bush is now President of the United States.

The woman who put President Barack Obama on the spot by telling him she was “exhausted” by defending his economic policies has lost her job. 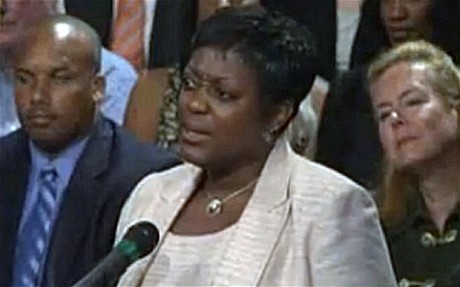 Velma Hart, an Obama supporter, became a celebrity after she expressed her frustration with Mr Obama at a televised “town hall” meeting in September. The chief financial officer of AmVets, a military veterans’ group, seemed to sum up the growing disillusionment with Mr Obama.

“They called me in on a Friday afternoon and said they had made a decision … we should make that cut,” she told CNBC.

She said she was “afraid” but remained hopeful and believed the president’s economic policies would work.

“I’m a data-driven person. The data says the economy’s getting better. … I want to focus on the positive and be optimistic. And assume that somehow things will work out, that there’s an opportunity out there with Velma’s name on it that’s right around the corner.”

Mrs Hart made attracted attention in September when she challenged Mr Obama.

“I’m one of your middle-class Americans,” she said at the meeting. “And, quite frankly, I’m exhausted. I’m exhausted of defending you, defending your administration, defending the mantle of change that I voted for and deeply disappointed with where we are right now.

“I have been told that I voted for a man who said he was going to change things in a meaningful way for the middle class. I’m one of those people. And I’m waiting, sir. I’m waiting.”