Jiji Tsushin’s site has several photos of the Self Defense Force soldiers carrying out decontamination work.

I wrote a post on Monday about them doing decontamination at the Iitate-mura village office using screwdrivers. Here in Jiji’s photo, they are decontaminating the town office in Namie-machi.

The tools: their hands.

There is no information whether the SDF were ever told of the radiation levels – air radiation, density of radioactive materials from the sludge and dead leaves they were made to remove, or they were fitted with personal survey meters to control radiation exposure.

Probably not. They are the soldiers stationed either in Fukushima City or Koriyama City in Fukushima Prefecture. One is 44th Infantry Regiment (Fukushima) and the other is 6th Artillery Regiment (Koriyama), according to the tweet by the Japan Ground Self Defense Force. You can be pretty sure that they are not trained in decontamination, not necessarily of radioactive materials but of more ordinary chemical spills, etc.

From Jiji Tsushin; the photo was taken on December 8 at the town hall in Namie-machi, 8 kilometers north of Fukushima I Nuclear Power Plant. It was raining slightly, the photo caption says. 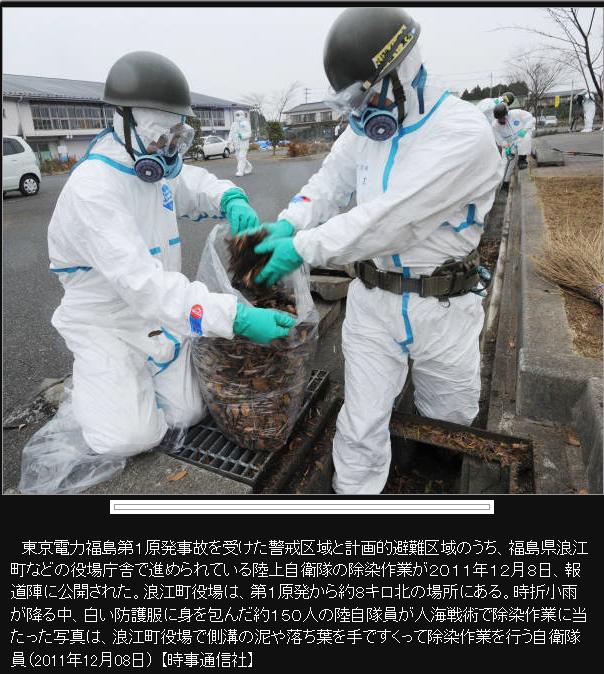