Surely as a close tie with Venezuela will show him, you just cannot trust America, both commercially and politically.

– Raul Castro: Cuba’s president accuses US of “illegally training” dissidents inside its diplomatic compound in Havana (Independent, May 12, 2015) 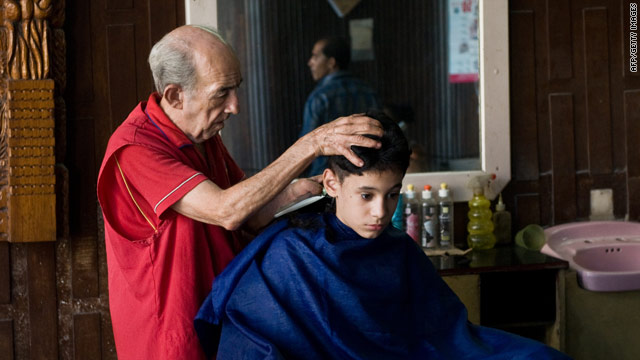 Cuban barbers, like this one working in Havana last month, became self-employed in April.

Havana, Cuba (CNN) — Cuba announced on Monday it would lay off “at least” half a million state workers over the next six months and simultaneously allow more jobs to be created in the private sector as the socialist economy struggles to get back on its feet.

The plan announced in state media confirms that President Raul Castro is following through on his pledge to shed some one million state jobs, a full fifth of the official workforce — but in a shorter timeframe than initially anticipated.

“Our state cannot and should not continue maintaining companies, productive entities and services with inflated payrolls and losses that damage our economy and result counterproductive, create bad habits and distort workers’ conduct,” the CTC, Cuba’s official labor union, said in newspapers.

Castro had announced layoffs in August, but said they would occur over the next five years.

HAVANA, Nov 11 (Reuters) – Cuba has ordered all state enterprises to adopt “extreme measures” to cut energy usage through the end of the year in hopes of avoiding the dreaded blackouts that plagued the country following the 1991 collapse of its then-top ally, the Soviet Union.

In documents seen by Reuters, government officials have been warned that the island is facing a “critical” energy shortage that requires the closing of non-essential factories and workshops and the shutting down of air conditioners and refrigerators not needed to preserve food and medicine.

Cuba has cut government spending and slashed imports after being hit hard by the global financial crisis and the cost of recovering from three hurricanes that struck last year.

“The energy situation we face is critical and if we do not adopt extreme measures we will have to revert to planned blackouts affecting the population,” said a recently circulated message from the Council of Ministers.

“Company directors will analyze the activities that will be stopped and others reduced, leaving only those that guarantee exports, substitution of imports and basic services for the population,” according to another distributed by the light industry sector.