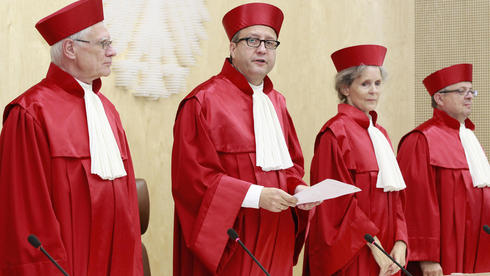 Just as we were complaining about lack of newsflow, here comes Germany, coincidentally just as Merkel comes back from vacation, with an update from Karlsruhe that the Constitutional court, which may reject the ESM as is in its September 12th decision, will likely be delayed even more following the filing of a brand new lawsuit challenging the constitutionality of the ESM.

The Constitutional Court in Karlsruhe has received a further appeal against the euro rescue package, which could upset the timetable for the euro rescue. According to information from Reuters Online, a group of plaintiffs to the € critic Professor Markus Kerber has filed a constitutional complaint, including an emergency petition. The key message is: Since the last ten days at the European Court in Luxembourg, the complaint is similar to an Irish MPs to decide, the German judges would wait until the spoke on the matter higher court judgment. The original date expected for an announcement, the 12th September, at which they would decide on the fast track in terms of admissibility of ESM and Fiscal Pact was likely untenable.