Continuing with the trend established some years ago, police state imagery was definitely in full force during the Brit Awards 2011. 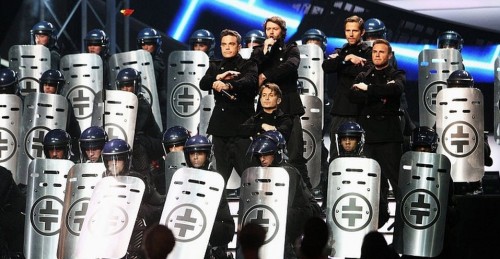 Take That performed “Kidz” surrounded by police in riot gear who then unclothe themselves to become sexy men and women dancing around in underwear. As seen in the article The Transhumanist and Police State Agenda in Pop Music and Lady Gaga’s “Alejandro”: The Occult Meaning , there seems to be a constant effort to make sexy and trendy the concept of police oppression.

The lyrics of “Kidz” are also quite interesting:

They say nothing
Deny everything
And make counter accusations
My friends, my dear, my love, my God

Read moreTake That – Kidz: Police State at the Brit Awards 2011