Shame on this president for persecuting whistleblowers with a legal relic, while administration officials leak with impunity 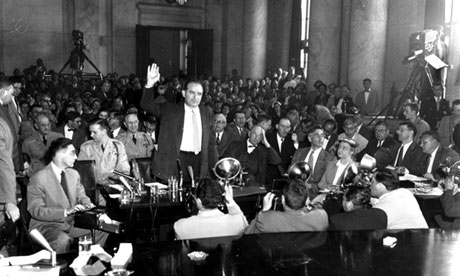 Senator Joseph McCarthy, chief ideologue of the cold war witch-hunts, takes the pledge as a witness in 1954 hearings about alleged communist infiltration of the US army. Photograph: Associated Press

The conviction of Bradley Manning under the 1917 Espionage Act, and the US Justice Department’s decision to file espionage charges against NSA whistleblower Edward Snowden under the same act, are yet further examples of the Obama administration‘s policy of using an iron fist against human rights and civil liberties activists.

President Obama has been unprecedented in his use of the Espionage Act to prosecute those whose whistleblowing he wants to curtail. The purpose of an Espionage Act prosecution, however, is not to punish a person for spying for the enemy, selling secrets for personal gain, or trying to undermine our way of life. It is to ruin the whistleblower personally, professionally and financially. It is meant to send a message to anybody else considering speaking truth to power: challenge us and we will destroy you.

Only ten people in American history have been charged with espionage for leaking classified information, seven of them under Barack Obama. The effect of the charge on a person’s life – being viewed as a traitor, being shunned by family and friends, incurring massive legal bills – is all a part of the plan to force the whistleblower into personal ruin, to weaken him to the point where he will plead guilty to just about anything to make the case go away. I know. The three espionage charges against me made me one of “the Obama Seven”.