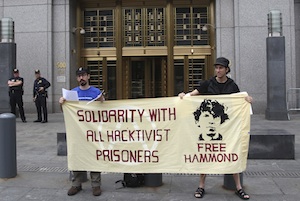 Protesters stand in front of the federal courthouse during the arraignment of Jeremy Hammond in Manhattan on May 14, 2012.

NEW YORK—I was in federal court here Friday for the sentencing of Jeremy Hammond to 10 years in prison for hacking into the computers of a private security firm that works on behalf of the government, including the Department of Homeland Security, and corporations such as Dow Chemical. In 2011 Hammond, now 28, released to the website WikiLeaks and Rolling Stone and other publications some 3 million emails from the Texas-based company Strategic Forecasting Inc., or Stratfor.

The sentence was one of the longest in U.S. history for hacking and the maximum the judge could impose under a plea agreement in the case. It was wildly disproportionate to the crime—an act of nonviolent civil disobedience that championed the public good by exposing abuses of power by the government and a security firm. But the excessive sentence was the point. The corporate state, rapidly losing credibility and legitimacy, is lashing out like a wounded animal. It is frightened. It feels the heat from a rising flame of revolt. It is especially afraid of those such as Hammond who have the technical skills to break down electronic walls and expose the corrupt workings of power.