– James Foley Worked Under USAID, a Known U.S. Intelligence Front. Was He More Than Just a Journalist?  (Liberty Blitzkrieg, Sep 2, 2014):

Before I get into the meat of this post, I want to make a few things clear.

First, the brutal beheading of anyone is barbaric, unacceptable and tragic beyond description. Second, this piece is in no way intended to cause any harm or pain to the Foley family. Third, I don’t have any proof that James Foley was involved in covert intelligence work for the U.S. government.

Read moreJames Foley Worked Under USAID, a Known U.S. Intelligence Front. Was He More Than Just a Journalist?

The same crisis actress plays the part of James Foley’s sister and Adam Lanza’s classmate. The clips of her saying “ummm” are intermixed from both parts, Lanza and Foley. If you think its only one girl, you are right, one girl playing 2 parts. 911, Sandy Hook and Boston https://www.facebook.com/ExposingTheB…

Please let me know if this video also disappears.

And also meet his sister smiling all over the face: 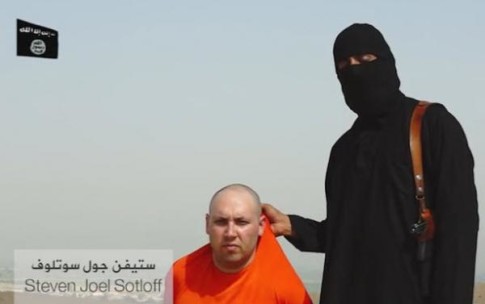 An American journalist, James Foley who was previously held captive by pro-Gaddafi forces for six weeks in Libya, was captured again in 2012 in Syria by – at the time ‘unidentified’ gunmen – which we now know was ISIS. James Foley – a freelance reporter from Boston – was kidnapped Thanksgiving Day 2012. We now know the sad ending of this young man’s life. In the following shocking clip just released from ISIS, Foley explains – at the point of a blade – “I call on my friends, family members and loved ones to rise up against my real killers, the U.S. government” – and is then gruesomely beheaded. In the last few minutes, the captor shows another poor soul.