Köhler was telling the truth or at least pointing to it:

German President Horst Köhler sparked a political storm on Thursday by suggesting Germany’s military involvement in Afghanistan was partly motivated by its economic interests rather than solely to guarantee its security.

In an interview he gave during his recent visit to the strife-torn country, Köhler appeared to say that the public debate about the war in Afghanistan was gradually facing up to the fact that protecting foreign trade was a legitimate reason for military action.

The remarks from Saturday to broadcaster Deutschlandradio, which have just now been seized on by opposition politicians, have prompted a furious debate about Germany’s military deployment – and whether Köhler has damaged the image of the NATO mission in Afghanistan. 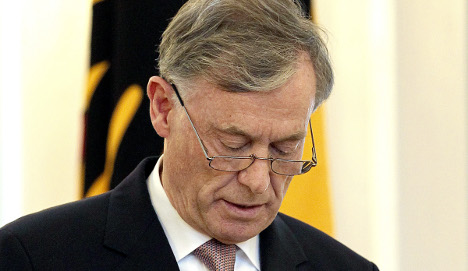 “I announce my resignation from the office of the federal presidency with immediate affect,” Köhler said in Berlin.

He said the decision came after withering criticism of comments he made connecting Germany’s military deployment in Afghanistan with the country’s economy.

“This criticism had absolutely no justification,” said the 67-year-old former head of the International Monetary Fund.

Looking emotional, Köhler asked for his supporters to understand his surprising resignation. The conservative Christian Democrats was nominated to be the country’s largely ceremonial head of state in 2004 and re-elected in 2009.

“It was an honour for me to serve Germany,” he said.

“I tried to get the president to change his mind but unfortunately I was unsuccessful,” Merkel told reporters.