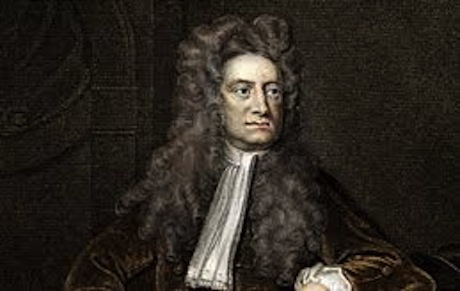 Newton: “Fie on you, Hansen, Mann, Jones et al! You are not worthy of the name scientists! May the pox consume your shrivelled peterkins!”

Harold Lewis is Emeritus Professor of Physics at the University of California, Santa Barbara. Here is his letter of resignation to Curtis G. Callan Jr, Princeton University, President of the American Physical Society.

This is an important moment in science history. I would describe it as a letter on the scale of Martin Luther, nailing his 95 theses to the Wittenburg church door. It is worthy of repeating this letter in entirety on every blog that discusses science.

It’s so utterly damning that I’m going to run it in full without further comment. (H/T GWPF, Richard Brearley).

Dear Curt:
When I first joined the American Physical Society sixty-seven years ago it was much smaller, much gentler, and as yet uncorrupted by the money flood (a threat against which Dwight Eisenhower warned a half-century ago). Indeed, the choice of physics as a profession was then a guarantor of a life of poverty and abstinence—it was World War II that changed all that. The prospect of worldly gain drove few physicists. As recently as thirty-five years ago, when I chaired the first APS study of a contentious social/scientific issue, The Reactor Safety Study, though there were zealots aplenty on the outside there was no hint of inordinate pressure on us as physicists. We were therefore able to produce what I believe was and is an honest appraisal of the situation at that time. We were further enabled by the presence of an oversight committee consisting of Pief Panofsky, Vicki Weisskopf, and Hans Bethe, all towering physicists beyond reproach. I was proud of what we did in a charged atmosphere. In the end the oversight committee, in its report to the APS President, noted the complete independence in which we did the job, and predicted that the report would be attacked from both sides. What greater tribute could there be?

How different it is now. The giants no longer walk the earth, and the money flood has become the raison d’être of much physics research, the vital sustenance of much more, and it provides the support for untold numbers of professional jobs. For reasons that will soon become clear my former pride at being an APS Fellow all these years has been turned into shame, and I am forced, with no pleasure at all, to offer you my resignation from the Society.

It is of course, the global warming scam, with the (literally) trillions of dollars driving it, that has corrupted so many scientists, and has carried APS before it like a rogue wave. It is the greatest and most successful pseudoscientific fraud I have seen in my long life as a physicist. Anyone who has the faintest doubt that this is so should force himself to read the ClimateGate documents, which lay it bare. (Montford’s book organizes the facts very well.) I don’t believe that any real physicist, nay scientist, can read that stuff without revulsion. I would almost make that revulsion a definition of the word scientist.

So what has the APS, as an organization, done in the face of this challenge? It has accepted the corruption as the norm, and gone along with it. For example:

Read moreProfessor Harold Lewis: ‘Global Warming Is The Greatest And Most Successful Pseudoscientific Fraud I Have Seen In My Long Life’