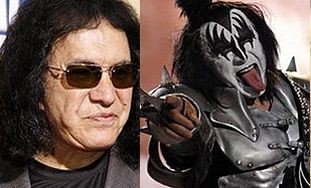 A famous sabra returnes home to Israel after leaving at the age of nine-year-old over half a century ago. The son of an impovrished Auschwitz death camp survivor, Chaim Witz returned to his birth country this week as mega-millionaire rock star and TV personality Gene Simmons.

“It’s amazing to be back here,” the 61- year-old co-founder of rock legend Kiss told The Jerusalem Post in Jerusalem’s David Citadel Hotel on Tuesday.