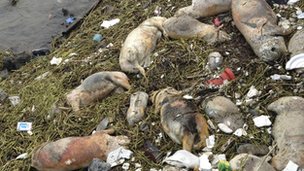 The news comes amid concerns over the 16,000 dead pigs found in Shanghai’s Huangpu river

Around 1,000 dead ducks have been pulled from a river in southwest China, local officials say.

Residents found the dead ducks in Nanhe river in Pengshan county, Sichuan province, and alerted the environmental department, they said.

Local residents and livestock were not at risk as the river was not used for drinking water, officials added.

Speaking in an interview with China National Radio on Sunday, Liang Weidong, a deputy director in Pengshan’s publicity department, said that the authorities were first made aware of the ducks on Tuesday.

Officials discovered over 50 woven bags which contained the carcasses of around 1,000 ducks in the river.