The rather curious case of Imran Awan continues with the latest development coming courtesy of the Daily Caller who notes that Imran was frantically liquidating nearly $2 million in real estate holdings right up until the day has was arrested at Dulles airport.

– Wasserman-Schultz IT Aide Arrested While Attempting To Flee Country, Charged With Bank Fraud:

Just a day after reports emerged that the FBI had seized a number of “smashed hard drives” and other computer equipment from the residence Imran Awan, the former IT aide of Debbie Wasserman-Schultz, we learn that Awan has been captured at the Dulles airport while attempted to flee the country.  According to Fox News, Awan has been charged with bank fraud.

“…wireless routers, hard drives that look like they tried to destroy, laptops, [and] a lot of brand new expensive toner.  It was in the garage. They recycled cabinets and lined them along the walls. They left in a huge hurry…”

Over the past few months, the story of the Awan brothers has been largely ignored by mainstream media. However, the Pakistani-born brothers Abid, Imran, and Jamal Awan are at the center of a criminal investigation by U.S. Capital Hill Police and the FBI.  While official charges have not yet been filed, allegations of wrong doing vary from simply overcharging taxpayers for congressional IT equipment to blackmailing members of Congress with secrets captured from emails.

The Awan brothers were Pakistani IT specialists, whom worked for more than 30 house and senate democrats, as well as Rep. Debbie Wasserman Schultz. The substantial scandal has raised questions about who may have been passed data which the Awans had access to, given Pakistan’s history of collaborating with a number of foreign countries who have demonstrated past willingness to influence U.S. politics.

Now, per an exclusive report from the Daily Caller, we learn that the twisted plot surrounding the Awan brothers has grown even more interesting as FBI agents have reportedly seized a number of “smashed hard drives” and other computer equipment from their former residence in Virginia. 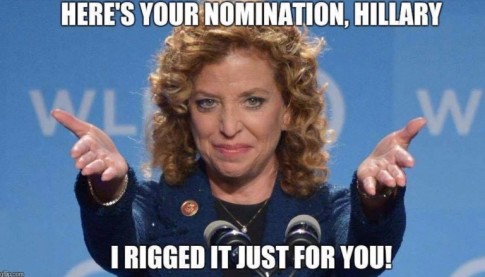 – “To Ensure Her Election”: Wasserman-Schultz Admits She Really Worked For Hillary While At DNC:

Still don’t believe that elections are rigged, and that the whole thing is a sham?

After all that time claiming to be “neutral” as the head of the Democratic National Committee, Debbie Wasserman-Schultz let down her guard this week and admitted she had actually been working ‘to prepare for Hillary Clinton to be [their] nominee’ and to ensure her election.

It was everything that she has always denied, but we knew all along.

And the Wikileaks dump confirmed it, brought it out into the open, forced Debbie to step down as head of the DNC… but low and behold, just went to work as the chairman of Hillary’s campaign anyway. Open, brazen corruption.

Read more“To Ensure Her Election”: Wasserman-Schultz Admits She Really Worked For Hillary While At DNC

Update 1: In a quite shocking ‘beyond caring what the average joe thinks’ move, Hillary Clinton just announced that Debbie Wasserman Schultz will serve as an honorary chair on Clinton’s campaign.

Hillary Clinton is thanking her “longtime friend” Debbie Wasserman Schultz after the Florida congresswoman’s decision to step down as chair of the Democratic National Committee.

“I am grateful to Debbie for getting the Democratic Party to this year’s historic convention in Philadelphia, and I know that this week’s events will be a success thanks to her hard work and leadership,” she said.

“There’s simply no one better at taking the fight to the Republicans than Debbie–which is why I am glad that she has agreed to serve as honorary chair of my campaign’s 50-state program to gain ground and elect Democrats in every part of the country, and will continue to serve as a surrogate for my campaign nationally, in Florida, and in other key states.”