Germany- The city council decided refugee(15), who attacked a married couple with a knife in Cottbus because they didn't show him respect and was expelled from the city can stay.https://t.co/eCib9eYxrg pic.twitter.com/I4G0HvsYlb

Germany- Judge sees no flight risk: Syrian(16) and Lebanese(15) released from custody after stabbing a German boy in Cottbus. Needless to say but people in Cottbus aren't exactly happy!https://t.co/ougGUh4ZN6 pic.twitter.com/pDfJk8krTC 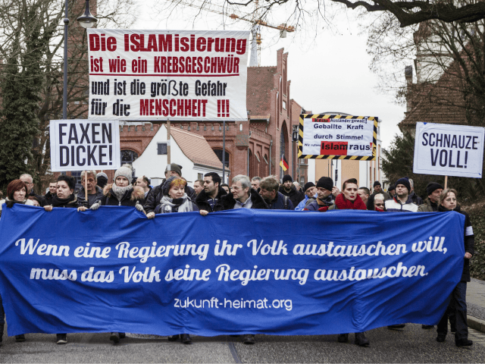 – Over 2,000 Germans March Against Mass Migration in City Experiencing Wave of Migrant Crime:

Around 2,000 demonstrators gathered in the German city of Cottbus over the weekend to protest mass migration after the city had seen a rise in violence that often involved migrants.

The protest, organised by the group Zukunft Heimat or Future Homeland, saw 2,000 individuals gather to protest the ongoing migrant violence in the city, Deutsche Welle reports.

Among the protesters were everyday Germans, young and old, along with right-wing activists.

One of the most famous faces at the event was Dresden-based anti-Islamisation movement PEGIDA founder Lutz Bachmann who gave a speech to the crowd. Anti-mass migration Alternative for Germany (AfD) politician Daniel Freiherr von Lutzow was also present but did not speak.

Germany- Asylum seeker from Chad draws a kitchen knife in the train during the checking of his ticket from Cottbus to Dresden. The man was overpowered by police and arrested.https://t.co/8Pa3OrBcAF pic.twitter.com/g2cQo8LIXT

Germany- Another incident in Cottbus between Syrians and Germans. Two Syrians(17,20) threatened people and acted aggressively towards police. The police knew both of them because of previous incidents already.https://t.co/ZTIllYp2X6 pic.twitter.com/2IBPOs0LS4

Germany- Again multiple incidents between foreigners and Germans in just one night in Cottbus. The city declared this week, it won't take anymore refugees after a knife attack by two Syrians and multiple other incidents.https://t.co/j7JslR2Ned pic.twitter.com/cMzgsIER76