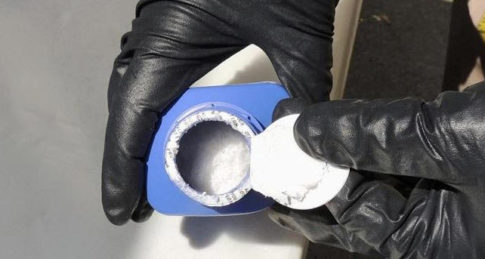 – A New Street Drug Can Kill You By Touching Your Skin: What You Need To Know:

The opioid epidemic is a real tragedy. It has been devastating states like West Virginia, Vermont, and Maine – among others – and it’s been the number one factor in a major incarceration shift that is still seldom discussed by the media.

But as soon as the Centers for Disease Control and Prevention (CDC) released a new set of national standards for prescribing painkillers, yet another deadly drug threat is beginning to concern authorities in certain states.

New Hampshire Governor Chris Sununu spoke at a press conference this week, warning that a drug that’s 10,000 times stronger than morphine has made its way into the state. As a result, many first responders have been left scrambling to find a way to handle this new threat.

Engineered to be used as an elephant tranquilizer, the drug’s lethal dosage is 20 micrograms. Since the product can cause deadly effects just by being sprinkled on someone’s skin, authorities are highly concerned.

Read moreNew Street Drug Carfentanil Can Kill You By Touching Your Skin: What You Need To Know

If you think American corporations are corrupt and only “in it for the money,” then you’ll really be shocked by the actions of certain corporations in China. Most of ours have nothing on Chinese corporations, where corruption is not simply the name of the game but an accepted form of doing business.

Normally that might not matter much, but when it comes to Chinese chicanery involving potentially dangerous medications, we now have a reason to worry.

The Associated Press is reporting that Chinese pharmaceutical vendors have no qualms at all about selling one of the strongest opioids in circulation – one that is so deadly that an amount smaller than a poppy seed can kill a human being.