Last weekend, when we reported that Germany’s Raiffeisenbank Gmund am Tegernsee – a community bank in southern Germany – said it would start charging retail clients a fee of 0.4% on deposits of more than €100,000 we said that “now that a German banks has finally breached the retail depositor NIRP barrier, expect many more banks to follow.”

Not even a week later, not one but two large banks have done just that. 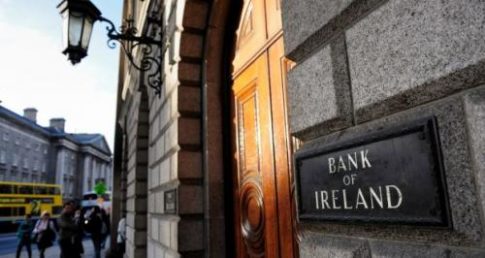 Overnight, the Irish Times reported that Bank of Ireland is set to become the first domestic financial institution to pass on the ECB’s negative rates to customers for placing their money on deposit with the bank. The newspaper has learned that Bank of Ireland, which is 14% owned by the State, has informed its large corporate and institutional customers that it plans to charge them a negative rate of -0.1% for deposits of €10 million or more starting in October.

It seems that the Central Bank were aware of fraudulent transactions at Irish Life and Permanent and Anglo Irish Bank.

Newly uncovered files have revealed that the €7 billion fraud that led to three bankers being criminally convicted earlier this month was “potentially based on encouragement” from Ireland’s Central Bank.

We are sure there is a joke in here somewhere but it is no laughing matter. Following a request for copies of 8 documents  of correspondence between Ireland’s (former) finance minister and the nations’ largest bank executives, the Irish minstry of finance has been forced to admit that it cannot find two out of the eight. The documents, previously 100% redacted, raises questions as to whether other documents have gone ‘missing’. As RTE reports, the Department of Finance said it had carried out a widespread search for the documents and it was not clear why the original versions could not be located. Those darn leprechauns… We are sure, however, it has nothing to do with the Irish banks “picking bailout numbers out of their arses.”

Documents relating to the banking crisis have gone missing at the Department of Finance.

The department has conceded that some correspondence forwarded from Bank of Ireland to the former minister for finance Brian Lenihan can no longer be located.

THE Irish government is in talks to bail out its three biggest banks, in a move that would see it take a stake of up to 80% in Anglo Irish Bank, which was last week rocked by a scandal over secret loans to its former chairman.

A total of up to €7 billion (£6.5 billion) will be injected into the three biggest banks, most of it through the government buying new preference shares in the institutions.

Bank of Ireland and Allied Irish Bank, the country’s two largest banks, will get €2 billion each from the government, with shareholders able to invest another €1 billion in each. Anglo will receive €1 billion from the state.

Shareholders in Anglo have already been hard hit. The bank’s shares have lost 98% of their value in the past year, falling sharply last week with revelations that the chairman, Sean Fitzpatrick, had failed to disclose €87m of loans he had received from the bank.

THE Irish government has agreed to take part in a €3 billion (£2 billion) bailout of Bank of Ireland that will be led by private equity. The deal would be the first state aid for an Irish bank.

This week a number of private-equity groups will make proposals to BoI. A condition of the government cash injection will be that new investors are locked in for a set time to ensure they don’t try to sell quickly and make a big profit.

Ireland was one of the first countries to respond to the credit crisis with a guarantee for bank liabilities worth some €440 billion, but until now it has not bailed out or nationalised any banks, and they have not raised equity themselves.

Read moreBailout for Bank of Ireland