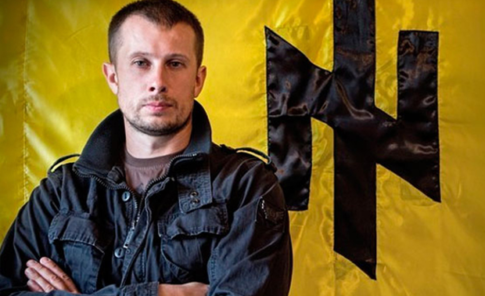 Today’s Ukraine is painfully reminiscent of Germany in the 1920s: poor governance on the heels of a lost war, which – added to the sense of betrayed hopes and the sharp decline in average incomes coupled with rising prices – is all driving a critical mass of the Ukrainian population toward an overwhelming feeling of desperation. A demand from the public for a “strong hand” – a new, authoritarian ruler – is rapidly coalescing, due to their dissatisfaction with President Poroshenko and all the other jokers they’ve been dealt from that shabby deck of political cards.

And a man like that already exists in this destitute and disintegrating country.

Andriy Biletsky, the commander of the Azov Battalion who is known to his comrades-in-arms as the “White Führer,” is making an ever-bigger name for himself in the Ukrainian parliament.

He makes no secret of his views – in his 2014 program declaration “Ukrainian racial social nationalism is the core of ideology of ‘Patriot of Ukraine’ organization” he expressed himself quite bluntly: “Our nation’s historical mission at this critical juncture is to lead the global White Race in its final crusade for its survival. A crusade against the Semite-led Untermenschen.”