– Why Is Alphabet CEO Eric Schmidt Technically Serving In The Department Of Defense?:

Eric Schmidt, chief executive of Google parent company Alphabet, was appointed chairman of a Department of Defense program in 2016 that was established by former President Barack Obama’s administration.

A staunch supporter of the Democratic Party and critic of President Donald Trump, Schmidt still continues to lead the Defense Innovation Board (DIB), even well after the new administration took over in January. This begs the question: should Schmidt’s history of partisan advocacy and condemnation of Trump be a worrisome prospect for the current White House?

Regardless of the answer, Trump’s retention of Schmidt may be emblematic of more than political divisiveness within the current administration, like from “Obama holdovers.” In fact, it may be the opposite of unwanted internal discord and a sign of an underlying ethos for the Trump administration — diversity of thought.

The world’s second-largest company by market capitalisation Alphabet, which owns Google, is under pressure in its key source of income – advertising.

Companies are pulling their ad dollars from Alphabet-owned YouTube after discovering their brands were being linked with extremist content because of a numbers-based system driven by profiling and popularity.

This week Australian companies including Telstra joined a host of global brands that have stopped advertising on the platform, and analysts say the boycott could cost Alphabet $US750 million – a big number but a small fraction of the company’s expected revenue of $US73 billion.

It’s long been difficult to catalogue everything that Google does, and apparently Google couldn’t keep up with anymore either because the company has unveiled a somewhat bizarre restructuring effort that will see “Google” become a wholly-owned subsidiary of a new holding company called “Alphabet.”

Google directors will become Alphabet directors, Larry Page will be the holding company’s CEO, and Page’s deputy Sundar Pichai will now be CEO of Google. Alphabet will replace Google as the publicly traded entity, Google shares will become Alphabet shares, but the tickers will remain as is – or something. Here’s Bloomberg trying to put it in perspective.

Google is adopting this structure in order to make clearer the difference between its main business and longer-term endeavors, as Page and Brin take on more strategic roles, while leaving operational management to trusted deputies.

Of course in today’s market, all news is good news even if it’s almost impossible to digest and evaluate, or maybe traders presume the move will be somehow “tax advantaged”, but whatever the case, the stock is soaring in AH trading. 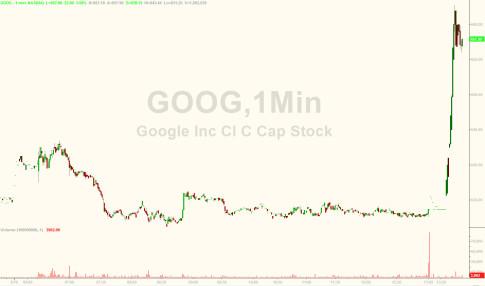