Alexander Lebedev, the Russian oligarch, has accused a group of spies and policemen of plotting to steal his multi-billion pound business empire in an open letter to Vladimir Putin, the prime minister. 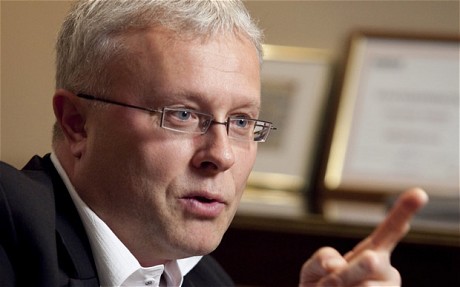 Alexander Lebedev said he had been asked to pay seven-figure bribes to stop the harassment Photo: BLOOMBERG NEWS

The 50-year-old owner of The Independent newspaper titles and the London Evening Standard said his Moscow-based banking empire was under serious attack and that he had been threatened with jail unless he left the country.

“Thank God there have been no grenades or plastic explosives so far,” he wrote.

“(But) we are dealing with an organised mafia group acting on the pretext that it is “carrying out orders from above.”

With an estimated £1.9 billion to his name, Mr Lebedev is thought to be the 40th richest man in Russia controlling a sprawling banking empire which has assets in the airline, housing, and agricultural sectors as well as shares in Novaya Gazeta, a famous liberal opposition newspaper.

But Mr Lebedev said a gang of corrupt FSB secret service agents and policemen were trying to take it all away from him in an elaborate criminal conspiracy tied to a small bank he used to control. The same gang had already perfected their scheme to steal “a minimum of” £3.1 billion in similar raids in the past, he claimed.