Turkish President Recep Tayyip Erdogan has announced the launch of a new military operation against Kurdish militants in Iraqi Sinjar. He also vowed to take over the Kurdish-controlled town of Tal Rifaat in northern Aleppo, Syria.

“We’ve eliminated 3,747 terrorists [in Syria’s Afrin],” Erdogan said on Sunday, adding that Ankara has now begun an operation against the Kurdish militants in Iraq’s Sinjar.

“Remember, I told you we’d get them. They will flee, we will chase; the work will not end with Afrin. The PKK went to Sinjar – ‘We’ll go there as well,’ I said. Operations there began,” the president declared.

Ankara’s operation ‘Olive Branch,’ targeting Kurdish militias in Syria’s Afrin region, has nearly realized its goals, according to Erdogan. “We will take control of the Tal Rifaat town shortly and thus achieve the goals of the operation,” he said. Tal Rifaat is the last stronghold in the Afrin region held by the Kurdish militias.

Erdogan has insisted that Turkey’s military activities in neighboring countries targeted “terrorists” exclusively and did not constitute an invasion.

After a bloody, two month cross-border campaign of Turkish forces to dislodge Kurdish YPG “terrorists” from the Syrian city of Afrin, President Recep Tayyip Erdogan declared complete victory on Sunday as Turkish and allied FSA flags have been raised for the first time over Afrin’s city center.

Kurdish YPG forces (or “People’s Protection Units”) were widely reported to have withdrawn before pro-Turkish forces entered the city before dawn on Sunday, allowing invading forces to secure the city while facing no resistance. In a televised speech Erdogan claimed to have “saved” the city through the “heroic” actions of his military while also framing the operation which took place entirely on Syrian soil as humanitarian in nature. He said, “This operation has shown the whole world that Turkey sides with the oppressed,” as reported by Rudaw.

Kurdish authorities of Afrin canton, for the their part, condemned Russia for allowing Turkey to use airspace to dislodge Kurdish protection units. At a Kurdish press conference, an Afrin canton official leveled the charge that “Russia actively participated in opening airspace for Turkey to ‘exterminate our people with all kinds of weapons and sacrificed our people for their interests in Syria, and under international silence, of the coalition, and EU'”. The spokesperson added that, “We decided to remove civilians from the city to avoid a more terrible humanitarian catastrophe.”

Erdogan also appears to have taunted the retreating Kurdish forces, saying that a “large number” of Kurdish fighters had “fled with their tails between their legs,” and added that Turkish special forces have been deployed in the city, with demining operations also underway. “Now the Turkish flag will fly over there! The flag of the Free Syrian Army will fly over there!” said Erdogan. 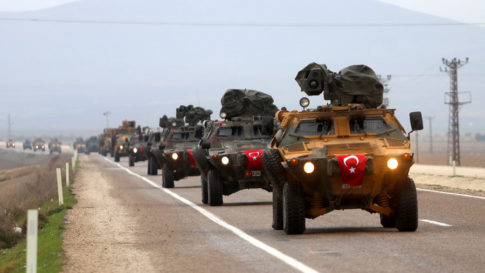 Ankara has sent police special forces units to the northern Syrian region of Afrin in anticipation of a new phase of its campaign against the Kurdish militias. It also says the UN-backed ceasefire does not affect its operation.

The special forces units crossed into Syrian territory from the southern Turkish provinces of Kilis and Hatay, local media reported. The new forces are expected to hold villages taken by Turkish troops from the Kurdish People’s Protection Units (YPG) as well as to take part in urban combat as Turkey’s Operation Olive Branch apparently moves from the countryside to the major settlements.

“Deploying special forces is part of the preparation for a new fight that is approaching,” Deputy Prime Minister Bekir Bozdag told Turkish NTV. “The fight will shift to places where there are civilians, as the area (of fighting) narrows,” he said, adding that the special forces units have experience in fighting militants in residential areas.

Even though the Turkish operation has entered its sixth week, most of the larger towns in the Kurdish-held enclave, including the city of Afrin itself, remain in the hands of the YPG. Still, Turkish forces drove the Kurdish militias from all areas bordering Turkey, local media report. On February 20, Turkish President Recep Tayyip Erdogan said that the troops would lay siege to Afrin “in the coming days.”

Pro-government Syrian forces are expected to enter Afrin enclave “within hours,” local media report. Earlier, an adviser to the Kurdish administration said a deal has been reached to allow Syrian forces into the embattled area.

The reports follow the claim by the Kurdish official that the deal was reached between Damascus and the Kurdish People Protection Units (YPG) fighters. The negotiations were reportedly aimed at getting help from the Syrian government to repel the ongoing Turkish offensive on the Kurdish-held enclave of Afrin.