According to local reports from his native Spain, Baselga died from Creutzfeldt-Jakob disease, an incredibly rare and fatal condition causing brain damage that worsens rapidly over time.

– Jim Stone: So now everyone knows the MRNA corona vaxxes program the body to produce the prion for mad cow disease. Here is what is not so well known:

“Covid-19” itself has the prion for mad cow disease programmed into it. The entire time this was going on, they were saying that the protein the virus used to bind with cells was unique in a virus “So an MRNA vaccine could be made to combat the virus for that reason”. What they did not say is that the protein was unique because it just so happened to be the prion from mad cow disease. THAT ended up in a virus NATURALLY . . . . . YEP. And it ended up in the virus in the worst possible spot . . . . . YEP. 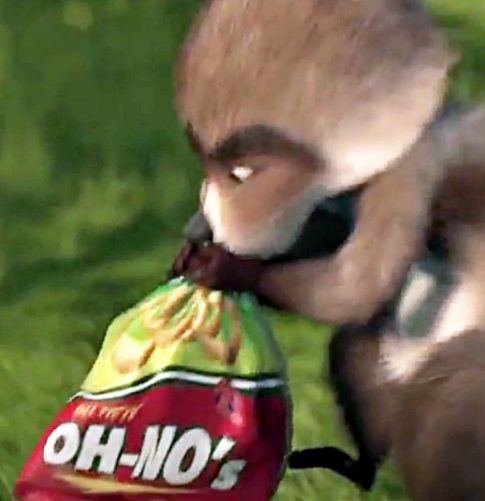 So now (reported fully down this page a ways) they claim to have “fought the virus” by creating a vaccine that genetically TELLS your body to produce the prion for mad cow disease, “because it will confuse the virus and prevent binding”. . . . . YEP, and meanwhile, the shot that supposedly “made you immune to corona” gave you creutzfeldt-jakob disease and you’re gonna go down like a mad cow from the shot once that prion takes hold in your brain, – right around six months to a year from what they say.

We now have a vaccine developer for Astra Zeneca who died of creutzfeldt-jakob disease (a coincidence I am sure, because that’s such a common affliction) *oh, it will be* now that so many people got that shot – AND we have a virus out in the wild that uses the prion from mad cow disease to bind with the cells it’s attacking.

HOW CUTE IS THAT?

I’ll tell you how cute: You had damn well better not have gotten this virus, because even if you showed no symtoms, you got trillions of those prions in you and if ANY of them dis-connected from the viruses you’ll eventually go down from this like a mad cow once the prions take off. It might take a while, I don’t know how many would actually detach from the virus but I can say that anyone who got the virus played the lottery a trillion times at least. And the media buried this, even though the prion was documented right from the beginning RIGHT HERE. 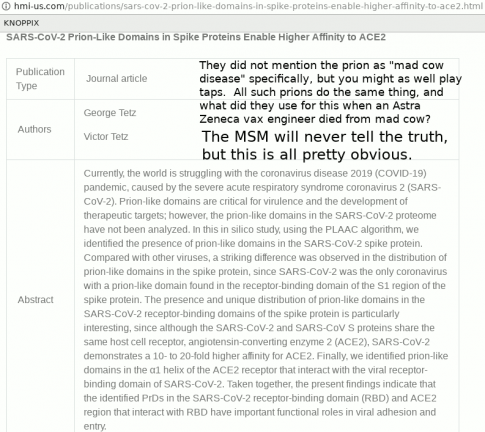 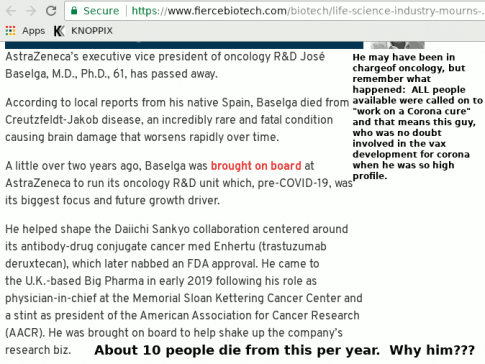 You can’t tell me they did not want to kill EVERYONE with this virus if they put that prion in it. that’s a major “Oh No!”

I was not going to even bother with Derek Chauvin until I hit this: 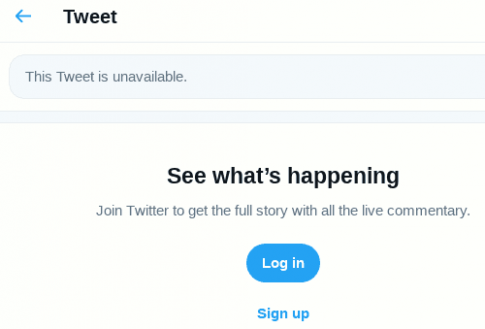 The first time around with the Derek story I could tell the knee was not really pushing on the neck and called it a psy op. I did not believe anyone died and that it was all an act to kick off riots (and still believe that, despite the “Floyd was in the middle of overdosing and died” story lines which I never believed) – I believed it was all an act and still do – anyway –

As part of the final act with all of this, the “defense” has now released video from another angle of view that shows Chauvin with his knee on Floyd’s shoulder the entire time. Camera angles may be tricky but even the first time around I did not see how his knee could have choked Floyd. And that would kill the official story, which the left needs to kick off more riots now that the truth about the corona vax has come out – a truth that will kill it.

With only 20 percent of America vaccinated (see the next report) they did not get the numbers of vaccinated they needed to kill off the country with their prion shot – a shot too many people know for what it is now and they’ll never get it – So now they want another round of race riots to happen to de-stablilize the country a different way. ENTER THE TWITTER CENSORSHIP, to prevent minorities from seeing exactly why Chauvin is going to be “acquitted”.

It’s just all so dirty. I don’t expect much from Twitter anymore, but this time I just gotta say, Seriously?? you mean to tell me Twitter is SO AGAINST THE TRUTH they won’t even allow people to see why Chauvin is gonna walk???

THEY ARE LYING ABOUT THE NUMBER OF PEOPLE VAXXED BIG TIME

The latest figure I heard was that 40 percent of Americans have been jabbed. But reality shows that the actual number of people jabbed is approximately on par with how many actually voted Biden. New Mexico has the highest vaccination rate in the country, at 25.56%. Utah has the lowest vaccination rate, at 12.88 percent. 30 states have a vaccination rate below 20 percent. The average vaccination rate is right around 17 percent. SEE THIS. So when the prion strikes, it will be highly visible, but it won’t wipe out society. We will predominantly lose people who either could not see the light or valued their job more than their life.

RIDDLE ME THIS: How did that happen? I’d bet he guinea pigged himself off the books. I MUST RESPONSIBLY TELL YOU: All the “fact checking sites” are calling B.S. on the spike protein being a prion so I am just hoaxing y’all . . . . . OOOOOPS, MAYBE NOT!!! We all know who the hoaxers are, and it’s the “hoax busters”!!! Gee, how did Covid 19 end up being the ONLY VIRUS EVER DISCOVERED that has a mad cow disease prion as the spike protein it uses to bind to cells, to provide cover for the MRNA vaxxes to give everyone mad cow when those vaxxes tell everyone’s bodies to manufacture that prion to get “immunity to corona”???? What a lovely “coincidence.”

Ouuch, let’s all hope mad cow disease is not delivered by that virus also. That had better stay bonded to the viral body or we are all TOAST.