“Jaguar Land Rover is being parallelled over to India, prior to closing the Solihull base as predicted when Ford flogged it to TATA. 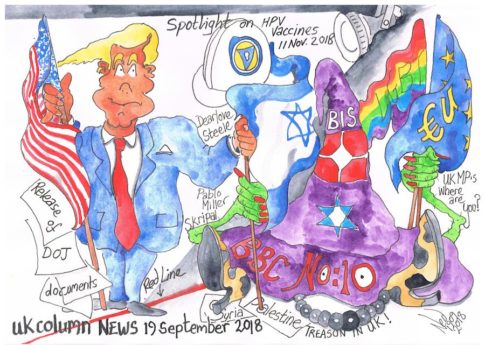 START – Syria: Idlib conference in Tehran and second meeting in Sochi
Turkish FM: the borders of Idlib will be protected – terrorist groups will be removed
Idlib: a crucible of the truth
The west is sceptical – will do what they can to disrupt the deal…
Michael Fallon (failed minister for war): what did he say…?
F-35 caught in turkey shoot…British government breaking down
Global Warfare: the new paradigm
09:21 – USA: Trump directs ONI to publicly release all Russia investigation texts…
Democrats in panic: attempting to stop the release of information
Fusion GPS: Christopher Steele and MI6 to be implicated…?
All roads lead to the Skripal ‘poisoning’ case…
Trump’s trade war: wants to preserve key American industries
17:11 – Rightwing thinktanks unveil radical plan for US-UK Brexit trade deal
The Guardian presents more nonsense devoid of reality
Parliament should make just policies and just laws for the nation
Liam Fox destabilising government policy and procedures…?
22:30 – Spotlight on HPV Vaccines conference: 11 November, London
23:38 – NATO: Mogherini and Stoltenberg meet – details kept secret from the public
Military unification between EU military and NATO…?
British Major General Charlie Stickland stands to attention in front of EU flag
Brexit – no exit…UK military to be fully unified into EU military no public discussion
Veterans for Britain: Winston Churchill – ‘we are with them, but not of them’
Nothing being done in Cabinet to stop this despite the Brexit vote
Military cuts have been made across EU countries deliberately to create EU military
MP’s hypocrisy – support UK troops but sell off UK defence to the EU…
MP’s duplicity: can be easily seen and has been going on for many years
India launches second ballistic nuclear sub: produced with free British steel…?
Jaguar Land Rover cuts staff to a three-day week – Solihull to close…?
40:01 – Treason May speaks at pro-Israel event: Israel not a racist state
May vows to defeat ‘scourge of anti-semitism’ – British and Israeli security merged…
British people not questioning another state having so much political power…?
Who are the Conservative & Labour Friends of Israel…who do they work for…?
Public should en masse demand from their MPs to leave the EU