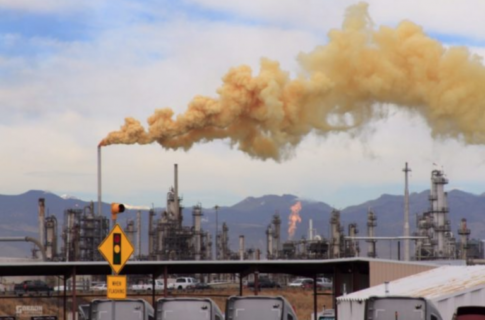 In fact, according to Cross Community Coalition director Candi Cdebaca, air quality control officials actually gave the refinery a special permit that allows them to release levels of toxins that surpass recommended levels.

“It’s absurd to think state health officials would even consider granting permits to pollute more. The state health officials are completely failing to protect these neighborhoods. And they are disregarding the cumulative impact of the many pollutants in the area. The ideal would be we aren’t letting them put that into the air at all, and if they are, we would know how to respond,” Cdebaca said.

According to the U.S. Agency for Toxic Substances and Disease Registry, hydrogen cyanide is an invisible gas that attacks the brain and heart, causing rapid breathing, convulsions, and loss of consciousness when someone is exposed to large amounts. Even low-level exposure can still cause breathing problems, headaches, and thyroid gland problems.

The gas is even classified as a chemical weapon by The Organization for the Prohibition of Chemical Weapons, which was established under the 1997 global Chemical Weapons Convention.

Earthjustice attorney Joel Minor is one of many Colorado residents who have filed a petition for a reasonable limit to be set on the level of hydrogen cyanide that can be released into the air.

“Everyone who lives near Suncor, as well as Suncor employees, have been breathing hydrogen cyanide. If the state is going to set a limit for hydrogen cyanide, it needs to set a limit that protects public health. And we have these laws requiring disclosure for a reason. People do have a right to know what they are breathing,” Minor said.

Many activists are calling on the EPA to step in and set regulations, but the regulators are obviously a part of the problem in this scenario. It may seem like regulators are acting as enforcers to keep polluters in check, but in reality, they act as a buffer that protects powerful interests from the public that they are harming. Just consider how the air quality control officials were handing out special permits allowing protected companies to work outside of the laws that were supposedly intended for these very companies.

The EPA actually has no concern for the environment, they just happen to use the environment as a cover story to create laws and gain an advantage for the companies that lobbied for exemptions to the agency’s regulations, and to collect money in fines. There are real solutions outside the common government paradigm, and that is mainly the ability for individuals, not governments, to hold polluters personally and financially accountable.

What this means is that the residents who are affected by this pollution should be able to sue the company directly for harming their health and damaging their property. It is actually the regulators who are preventing this from happening since it is their job to be judge, jury, and plaintiff, it takes that power away from the average people, and leaves us with no recourse to address the problems that are present in our communities.

“Nice, right in the middle of downtown Denver.”