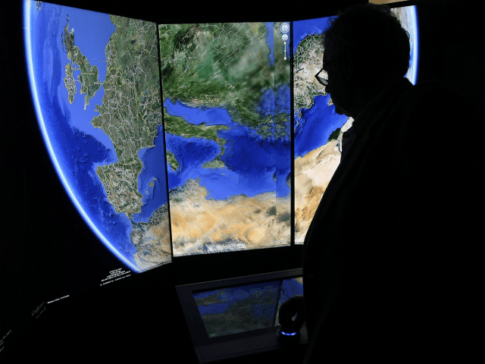 Our planet has just experienced the most extreme two-year cooling event in a century. But where have you seen this reported anywhere in the mainstream media?

You haven’t, even though the figures are pretty spectacular. As Aaron Brown reports here at Real Clear Markets:

From February 2016 to February 2018 (the latest month available) global average temperatures dropped 0.56°C. You have to go back to 1982-84 for the next biggest two-year drop, 0.47°C—also during the global warming era. All the data in this essay come from GISTEMP Team, 2018: GISS Surface Temperature Analysis (GISTEMP). NASA Goddard Institute for Space Studies (dataset accessed 2018-04-11 at https://data.giss.nasa.gov/gistemp/). This is the standard source used in most journalistic reporting of global average temperatures.

To put this temperature drop in context, consider that this is enough to offset by more than half the entirety of the global warming the planet has experienced since the end of the 19th century.

Since the end of the Little Ice Age in the 1880s, the planet has warmed by about 0.8 degrees C. You might think that was not a particularly drastic rate of warming to worry about. You might also note that such a rate of warming is well precedented in periods throughout history, such as during the Minoan, Roman and Medieval warming periods. Nonetheless this 0.8 degrees C rise – 0.9 degrees C, at a push – is the terrible climatic event the alarmist establishment has been assuring these last few decades is the worst thing ever and something that should worry us awfully.

So is this sudden cooling an even-worse thing? Not necessarily. As Brown goes on to explain in his piece, you can’t extrapolate trends from such a short time scale. Well, not unless you’re a climate alarmist… As we know from long experience, if it had been the other way round – if the planet had warmed by 0.56 degrees C rather than cooled, the media would have been all over it.

My point is that statistical cooling outliers garner no media attention. The global average temperature numbers come out monthly. If they show a new hottest year on record, that’s a big story. If they show a big increase over the previous month, or the same month in the previous year, that’s a story. If they represent a sequence of warming months or years, that’s a story. When they show cooling of any sort—and there have been more cooling months than warming months since anthropogenic warming began—there’s no story.

Meanwhile a study by Judith Curry and Nic Lewis – also largely unreported by the mainstream media – confirms what skeptics have been saying for years: that the computer models used by the alarmist establishment to predict global warming are running too hot.

According to Investors Business Daily:

In the study, authors Nic Lewis and Judith Curry looked at actual temperature records and compared them with climate change computer models. What they found is that the planet has shown itself to be far less sensitive to increases in CO2 than the climate models say. As a result, they say, the planet will warm less than the models predict, even if we continue pumping CO2 into the atmosphere.

As Lewis explains: “Our results imply that, for any future emissions scenario, future warming is likely to be substantially lower than the central computer model-simulated level projected by the (United Nations Intergovernmental Panel on Climate Change), and highly unlikely to exceed that level.

This brings projected “global warming” from being potentially dangerous to being easily manageable. Which is why, of course, it is unlikely to get much attention from a scientific establishment and a complicit media that much prefers to ramp up the global warming scare – even when the evidence doesn’t support it.