All part of the plan by TPTB.

Only around 10 out of 128 German fighter jets are currently usable the rest are out of commission! Out of those only 4 are currently ready for combat missions.https://t.co/qfdG0VriLa pic.twitter.com/2VYdTXQo02 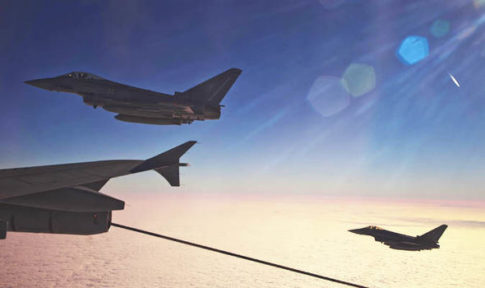 GERMANY has just FOUR useable Eurofighter jets available for Nato action out of a fleet of 128, according to a shock report today.

Respected magazine Spiegel said that coolant leaks in the fighter’s sensor system which detects enemy aircraft or incoming missiles have grounded all but a handful of the advanced warplanes.It means Germany is falling far short of its obligations to the Nato alliance and would be unable to intercept or repel a large-scale incursion of its airspace.Spiegel reported that technicians were able to replace the defective sensor pods on the wings – but the spare part necessary to seal the cooling circuit is no longer available because the manufacturer has been sold and no longer producing it.German military officials hoped that the jinxed Eurofighter’s many bugs would be ironed out after a disastrous report last year showed just 39 out of 128 were ready for action.

Now that figure has shrunk to just four – partly because Germany also has a chronic shortage of the missiles needed to make the aircraft fully combat operational.

The post-Second World War German armed forces have long been considered a joke among Nato alliesYears of defence cuts combined with a national disdain for martial affairs because of it’s drastic experiences in two world wars have led to the parlous state of its army, navy and airforce.A 2014 report by external auditors KPMG, engineering firm P3 and law firm Taylor Wessing, detailed 140 problems and risks for the military.Nato chiefs laugh at Germany as being the “Disarmed Services” of the Alliance.
One parliamentary critic allegedly said of his nation’s armed forces: “We’re practising disarmament through wear and tear.”Germany has significantly increased its defence budgets in recent years, but at a predicted 1.3 percent of GDP predicted for the forces this year, it still falls far short of the two percent called for by Nato.