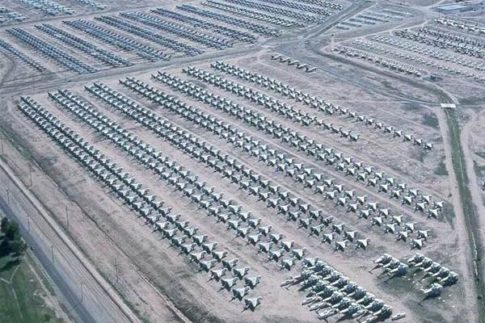 The first panacea for a mismanaged nation is inflation of the currency; the second is war. Both bring a temporary prosperity; both bring a permanent ruin. But both are the refuge of political and economic opportunists.

Military spending is the second largest item in the US federal budget after Social Security. It has a habit of increasing significantly each year, and the proposed 2019 defense budget is $886 billion (roughly double what it was in 2003).

US military spending exceeds the total of the next ten largest countries combined. Although the US government acknowledges 682 military bases in 63 countries, that number may be over 1,000 (if all military installations are included), in 156 countries. Total military personnel is estimated at over 1.4 million.

The reader could be forgiven if he felt that a US military base was rather unnecessary in, say, Djibouti or the Bahamas, yet the US Congress will not allow the closure of any military bases. (The Bi-partisan Budget Act of 2013 blocked future military base closings under the argument that they’re all essential for “national security.”) And Congress has a vested interest in keeping all bases open and consuming as much in tax dollars as possible (more on that later).

Of course, those bases need to be kept well-stocked with small arms, tanks, missiles and aircraft. Yet, in spite of the admittedly incredible number of US military bases across the globe, the additional stockpile of weaponry is so great that the government has difficulty finding places to put it all.

One storage location is pictured in the photo above – Davis-Monthan Air Force Base in Tucson, Arizona. In spite of the size of the photo, it shows only a portion of the aircraft located there. (And bear in mind, such aircraft often cost over $100 million each.)

If asked, the military states that, although these aircraft are in dead storage and many have never seen any use whatever, they might possibly be called up for service, “if needed.” Of course, if they’re needed, they’re unlikely to be of use if located in Arizona. And, in addition, they may not be useful for warfare, as war technology has moved on since the days when such aircraft designs were suitable.

It’s been said that generals are forever fighting the last war, and this is certainly true. Even a layman can observe that such conventional aircraft will never see use, as they serve no purpose in modern warfare.

And yet, these storehouses are being dramatically added to every year.

This year, production will be increased for the F-35 and F/A-18 aircraft. To get an idea of the cost of such expansion programmes, the F-35 Joint Strike aircraft alone will cost $400 billion for 2,457 planes. However, most of this cost will be for development and testing, not the planes themselves.

To save you the arithmetic, that’s about $162 million per plane. (I’m guessing that Henry Ford might have been able to produce them a bit more cheaply. It’s difficult to imagine what they could possibly be made out of to justify their extraordinary price tag.)

But, even though a staggering amount of money is spent on such aircraft, only to then send them to storage facilities at some point, why not, at the very least, sell off the surplus cheaply or scrap them and close down the costly bases that warehouse them?

Well there’s a bit of a snag there. If they were to be scrapped, it would be necessary to admit that they weren’t really necessary. And if they weren’t necessary, why were they purchased?

It may well be that the answer lies in the fact that the military industrial complex is a major political contributor, paying heavily into the campaign funds of both political parties.

It’s probably safe to say that, in doing so, they’re likely to expect something in return, and of course, that’s just what they get. As stated above, the “defense” budget is far beyond what it would cost to defend the US, and ridiculously so.

However, as far as the military industrial complex is concerned, the ideal situation might be for the US to enter into a policy of perpetual warfare with vaguely-stated military goals, and to do so on many fronts globally. If Congress were to approve a budget that would allow for that, the amount of kickback to the military industrial complex would not only be maximized, but it would be ongoing, from one year to the next.

So, is that what has occurred?

Well, if we look back at say, World War II, the most costly war in history, we see a war that was fought on three continents and cost the lives of between fifty and eighty million people, yet it was concluded a mere four years after the US joined.

By comparison, the undeclared war with Afghanistan has been a minor one, costing roughly 150,000 lives. Again, based upon arithmetic, as compared to World War II, it should theoretically have taken just over two months to conclude, yet to date, it’s been ongoing for seventeen years, and its daily cost has far exceeded that of a world war.

If this is not the case, then there’s only one other conclusion to draw. (As Sherlock Holmes often said, “Once you eliminate the impossible, whatever remains, no matter how improbable, must be the truth.”)

In this case, what remains is that winning the war is not the objective and, in fact, never was the objective. The objective would be to consciously create perpetual warfare; to extract billions in tax dollars each year from the electorate, in order to pass the revenue on to the military industrial complex in the form of armaments contracts. Whether those armaments are needed, or even useful, would be of minimal importance.

In recent years, the US military has gone far beyond its original concept of “defense.” It’s invaded more countries than ever before in its history, often with no direct provocation whatever, on the basis of “making the world safe for democracy.” (It should be borne in mind that invading a country, largely destroying it, then installing a puppet government is not exactly “democracy.”) In addition, these have not been actual “wars,” as, under US law, only Congress can declare war and has not done so since 1942.

In addition, the “enemy” in each case has been vague indeed. The US is not at war with any country specifically, but with “terrorism,” a non-specific enemy, one that’s even more vague than George Orwell described when writing 1984.

If nothing succeeds like success, it’s also true that nothing exceeds like excess. If this thought is troubling now, it will be even more troubling when the US makes good on its threat to attack North Korea, a small country next door to China, or to invade Iran, an ally of both China and Russia.

When the fur really starts to fly, it will be highly doubtful if the American taxpayer is able to pony up the further cost of a true world war, which would be far beyond what they’re shouldering at present.

And, since the loser in a war is almost always the country that runs out of money first, and the US is for all purposes broke, the outcome of such a war would not be in favour of the US.

You don’t have to sink with the US… There are practical steps you should take to prepare—before America makes a dangerous military move. Get the details straight from Jeff in our guide to Surviving and Thriving During an Economic Collapse.