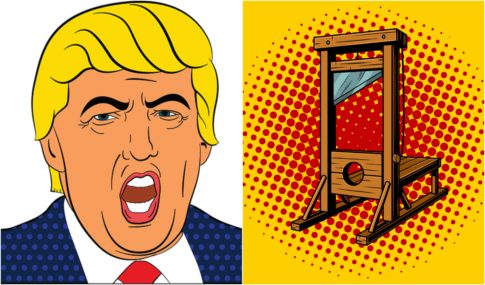 – It’s Official: US Is Seeking Death Penalty In Drug Cases – But Not For Big Pharma:

When Donald Trump suggested imposing the death penalty in drug-related cases, many people thought he was just spouting off at the mouth. Unfortunately, his statements were not just typical Trump talk. They are now official Justice Department policy.

U.S. Attorney General Jeff Sessions instructed Federal Prosecutors on March 21 to begin seeking the death penalty in drug-related cases where it is “appropriate.”

Sessions and his Justice Department are claiming that the policy is being implemented to counter the opioid epidemic. Sessions’ mandate comes after Donald Trump called for executing opioid dealers and traffickers and for harsher sentences in regards to trafficking.

Sessions apparently did not catch the irony of his statement that “in the face of all this death, we cannot continue with business as usual” as he was in fact calling for more death.

“Drug traffickers, transnational criminal organizations, and violent street gangs all contribute substantially to this scourge. To combat this deadly epidemic, federal prosecutors must consider every lawful tool at their disposal,” he said.

But Sessions did not call for the death penalty for anyone in Big Pharma who is almost single-handedly responsible for the opioid crisis. In fact, he could turn to his own agencies and speak to former DEA agent Joe Rannazzisi who ran the DEA’s Office of Diversion Control.

Rannazzisi states plainly that Big Pharma and its distributors intentionally pumped opioids into American communities knowing that they were addictive and knowing that people were dying. He also says that they did so knowing it was illegal.

Jim Geldhof, a 40-year DEA veteran who ran pharmaceutical investigations for the DEA, agrees with Rannazzisi as well, pointing out that in Kermit, West Virginia, a town with a population of 392, distributors ordered over 9 million hydrocodone pills over a two-year period.

At the end of the day, the last thing America needs is more drug laws, drug wars and drug warriors. An already violent society, America does not need any more death attached to it. While there very well may be an opioid crisis, Americans shouldn’t lose their heads and should remember that they claim to be a free society. Adults have a right to decide what they wish to consume. At the same time, drug companies who initially marketed these pills under false pretenses, should not be allowed to flood communities with highly addictive and dangerous drugs without informing doctors, patients and consumers of the dangers.

A solution to the opioid epidemic is not more prison and murder. It is reining in Big Pharma, addressing the issues that cause chronic pain, ending the Drug War and using substances like marijuana and kratom to help wean people off of opioids. Unfortunately, in terms of freedom, individual choice, compassion and courage when it comes to standing up to Big Pharma, America is not just failing to move forward, it is hightailing it in the wrong direction.