Alois Irlmaier predicted in around 1950 that the U.S. will get the greatest revolution of all time!

Check out this little salute/gesture David Hogg does at the end of his speech. #MarchForOurLives pic.twitter.com/Tj4EgHhZV2

Survivors of the deadly Valentine’s Day shooting at Marjory Stoneman Douglas High School in Parkland, Fla. (along with numerous celebrities such as Oprah, George and Amal Clooney, Steven Spielberg, Chrissy Teigen and a handful of other celebrities) are leading some 500,000 high school students Saturday during the “March for our Lives” anti-gun protest in Washington, DC.

The march was organized to build on the momentum of last week’s National School Walkout and put further pressure on lawmakers to ban assault weapons after shooter Nikolas Cruz killed 17 students and faculty with an AR-15.

Participants gathered on Pennsylvania Avenue near the US Capitol on Saturday morning ahead of the march, which was slated to begin at noon.

Hundreds of sister marches also are planned across the country and around the world, according to CNN.

Parkland survivor David Hogg has given dozens of interviews, often controversial, as part of his “gun-control advocacy” effort that started roughly one month ago after the shooting at his high school. In one particularly foul-mouthed interview, Hogg compared marching for gun control to teaching his luddite parents how to use iMessage.

Speaking to The Outline, Hogg, 17, tried to explain why he feels its important for young people to take things into their own hands.

”When your old-ass parent is like “I don’t know how to send an iMessage” and you’re just like, “Give me the f—ing phone and let me handle it,” Sadly, that’s what we have to do with our government.

“Our parents don’t know how to use a f—ing democracy, so we have to.”

In a separate interview with Good Morning America, Hogg declared that “today we are going to start a revolution.”

“We are sick and tired of the inaction here in Washington and around the country” by politicians who are “owned by the NRA. Today we are going to start a revolution,” Hogg said.

Hogg added that gun violence has multiple causes, including mental illness, per ABC.

Lin-Manuel Miranda, Ariana Grande, Jennifer Hudson, Miley Cyrus, Demi Lovato, Common, Andra Day, Vic Mensa and Ben Platt will all perform in DC and there will be speeches from 20 young people, both from Stoneman Douglas and other schools around the country that have been affected by gun violence. 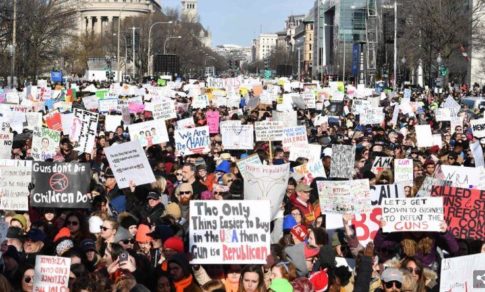 The Clooneys and Oprah each donated half a million dollars to the event, as did Spielberg and several other celebrities. Joshua Kushner, Ivanka Trump’s brother-in-law, has also promised to attend the march, the Daily Mail reported.

Others, including President Trump’s friend, Patriots owner Bob Kraft, lent their support in other ways. Kraft gave the teenagers from Parkland his football team’s private plane to shuttle them to DC on Friday. 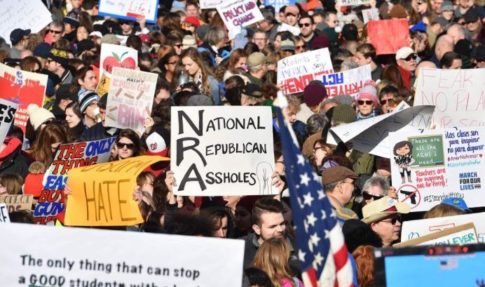 Delta also donated two of its aircraft to fly protesters to the city from Florida. The event will wreak havoc on local transportation and officials are on high alert for any security threats.

Hours before the march had even started, the crowds of students that had gathered on the mall were chanting “This is what democracy looks like.”

Attending the march Saturday, Isabel Kaegi, a 16-year-old student at Palatine High School in a suburb outside Chicago, said her school recently faced a false school shooting threat, prompting parents to pull their children out of class. Four teenagers were arrested for the threats. 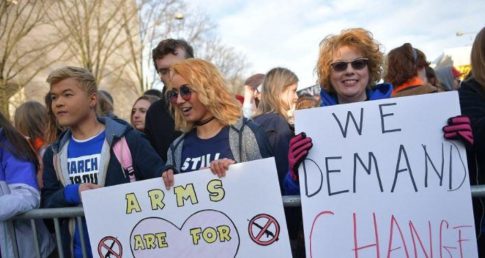 “We need common sense gun laws,” Kaegi said. “No one should be able to buy a military gun.”

As Politico described it, people began streaming toward Pennsylvania Avenue early. Police were everywhere along the route. Signs were posted along the route notifying marchers that firearms aren’t allowed in the area, even with a license to carry. 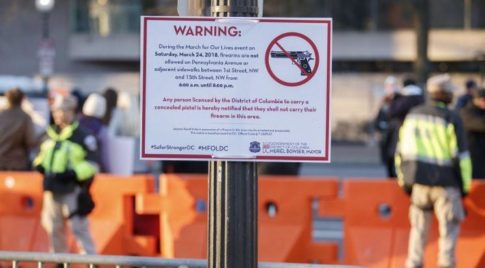 At 9 am, the area in front of the stage, erected near the base of the US Capitol, had already filled up. Signs criticized the Trump administration’s support for training and arming teachers and school staff.

The demonstration comes shortly after a shooting at Great Mills High School in southern Maryland, which killed two students, one of whom was taken off life support on Thursday.

The route for the march stretches down Pennsylvania Avenue, past the Trump International Hotel and stopping short of the White House. The march will be followed by mass school walkouts across the country on April 20. 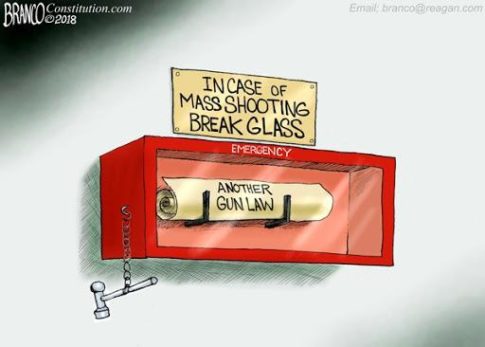