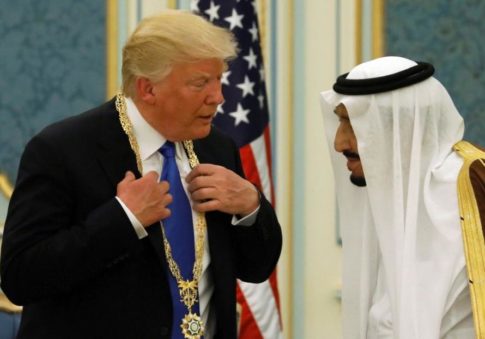 – Trump Asked Saudi King For $4 Billion So US Troops Can Leave Syria:

The Washington Post has revealed that President Trump attempted to extricate US troops from Syria by asking ally Saudi Arabia to foot the bill for postwar reconstruction and “stabilization” projects in the area of northeast Syria currently occupied by US coalition forces, to the tune of $4 billion. The deal would involve US allies like Saudi Arabia moving into a lead position regarding coalition policy in Syria, while hastening a US exit.

Though the coalition continues to claim that its occupation of Syrian soil is toward anti-terror and humanitarian efforts, including the reestablishment of civilian infrastructure in a region previously controlled by ISIS, America’s top general, CENTCOM chief Gen. Joseph Votel, admitted in congressional testimony this week that the Syrian government along with its Russian and Iranian allies have effectively won the war.

General Votel’s very frank admissions on Syria stunned hawks like Senator Graham, who were looking for more muscular policy goals. The Washington Post summarized this part of the exchange as follows:

[A]sked on Tuesday in a Congressional hearing if Bashar al-Assad had “won”, Gen. Joseph Votel, head of US Central Command, replied, “I do not think that is too strong of a statement. I think [Russia and Iran] have provided him with the wherewithal to be ascendant at this point.”

Votel declined to say whether he believed the US military should pursue that broader objective. And asked whether it was still policy that Assad must leave power, Votel said: “I don’t know that that’s our particular policy at this particular point. Our focus remains on the defeat of ISIS.”

However, US policy does remain fundamentally aimed at preventing Assad and his allies from reasserting control over oil and resource rich northeast Syria, and this is where Trump reportedly envisions the Saudis as having a greater role to play, taking the pressure off US forces.

According to the Washington Post the deal was articulated by Trump directly to Saudi Arabia’s King Salman in a December phone call. The Post reports:

In a December phone call with Saudi Arabia’s King Salman, President Trump had an idea he thought could hasten a U.S. exit from Syria: Ask the king for $4 billion. By the end of the call, according to U.S. officials, the president believed he had a deal.

The White House wants money from the kingdom and other nations to help rebuild and stabilize the parts of Syria that the U.S. military and its local allies have liberated from the Islamic State. The postwar goal is to prevent Syrian President Bashar al-Assad and his Russian and Iranian partners from claiming the areas, or the Islamic State from regrouping, while U.S. forces finish mopping up the militants.

But missed (or more likely deliberately ignored) by the Post reporters is the central irony that Saudi Arabia could possibly “stabilize” anything in Syria at all. As the New York Times concluded in a lengthy investigation over the kingdom’s role in fueling the rise of ISIS and directing the broader jihadist insurgency in Syria, the Saudis are “both the arsonists and the firefighters” in Syria and throughout the region.

Revelation of the $4 billion proposed deal comes as Crown Prince Mohammad bin Salman is set to arrive in Washington on Monday for high level talks with US officials, including a Tuesday meeting with President Trump. The Saudi Embassy in Washington refused to comment on the offer, and neither side has yet confirmed or denied that a deal was reached or is in the works.

Last month the US announced a mere $200 million pledge toward reconstruction efforts in Syria – a paltry sum (considering total rebuilding costs have been widely estimated at $200-350 billion) perhaps intended to highlight the need of other countries to share in the burden. The Washington Post continues:

For Trump – who has long railed against insufficient burden-sharing by allies under the U.S. security umbrella – getting others to foot the bill for expensive postwar efforts is important. A $4 billion Saudi contribution would go a long way toward U.S. goals in Syria that the Saudis say they share, particularly that of limiting Assad’s power and rolling back Iran’s influence. By comparison, the United States last month announced a $200 million donation to the stabilization effort.

The more simple translation of Trump’s message to the Saudis seems to be something like this: “Our occupation of Syria is costly. If you don’t want Assad and Iran to regain the whole country, then you’re invited to take over the occupation yourselves.”

Judging by Trump’s recent maneuvers with the Saudis and CENTCOM chief Votel’s congressional testimony, it appears we are in for more long, painful mission creep and perpetuation of the illegal occupation of Syria with no end in sight.