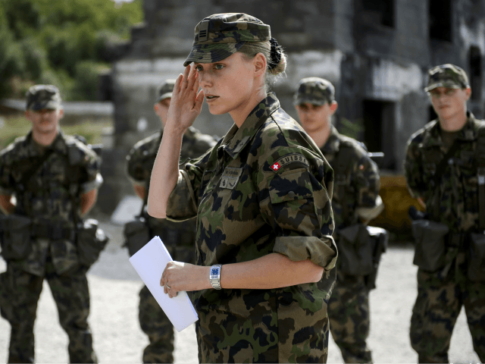 The Islamic headscarf is compatible with the Swiss army dress code, Federal Councilor Guy Parmelin has told local media, confirming reports that a hijab-wearing Muslim is enrolled in Switzerland’s school of recruits for the first time.

The Swiss People’s Party (SVP) figure addressed the issue in the National Council Monday when asked a question on whether the army allows soldiers to wear the veil.

“A young woman published a picture of her in a Swiss army uniform wearing a beret over an Islamic veil, boasting of being the first veiled woman to do military service,” Jean-Luc Addor told the Council.

“Is this tolerated?” the SVP representative for the canton of Valais asked, going on to question whether Switzerland’s army has “the will or the means to clamp down on veil-wearing and so prevent this kind of display”.

Parmelin, who heads the nation’s Department of Defence, Civil Protection and Sports, said the religious garment is perfectly within regulations as long as it is kept hidden underneath official regulation army headwear.

He added: “But the garment in question is not a veil, it is a scarf.” he added.

Vegan Complains After Being Disqualified From Military For Refusing To Wear Leather Boots https://t.co/zQluLsDEG9 pic.twitter.com/cnBcFJWu4n

Commenting on the controversy in an interview Tuesday, the minister insisted the army requires “distinct symbols” to be concealed when wearing a uniform, “whether it be a cross, a yarmulke, or anything else”.

“Like many other armies around the world, we apply uniform regulations based on the idea that soldiers should all look like they are wearing the same thing, externally,” he told RTS, adding that “hypothetically, a hijab should not be visible as long as [its wearer] is in uniform”.

Last week, a right-wing blog published pictures that the website purports are screenshots from social media which show a Muslim soldier “rejoicing” over being allowed to serve in the Swiss army in Islamic headgear.

One of the alleged screenshots depicts a woman in army fatigues and a beret, overlaid with text which reads: “I am the first veiled woman to do military service in Switzerland (and for them this is a pride).”