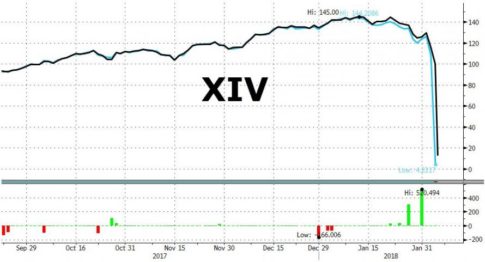 After it was halted for trading earlier in the day, which many saw as a harbinger of imminent termination – moments ago Credit Suisse confirmed retail vol sellers’ worst fears when it announced that it would indeed be “accelerating” the XIV ETN, i.e. terminating it.

Since the intraday indicative value of XIV on February 5, 2018 was equal to or less than 20% of the prior day’s closing indicative value, an acceleration event has occurred. Credit Suisse expects to deliver an irrevocable call notice with respect to the event acceleration of XIV to The Depository Trust Company by no later than February 15, 2018. The date of the delivery of the irrevocable call notice, which is expected to be February 15, 2018, will constitute the accelerated valuation date, subject to postponement due to certain events. The acceleration date for XIV is expected to be February 21, 2018, which is three business days after the accelerated valuation date.

How much money will holders of the now defunct XIV get?

On the acceleration date, investors will receive a cash payment per ETN in an amount equal to the closing indicative value of XIV on the accelerated valuation date. The last day of trading for XIV is expected to be February 20, 2018. As of the date hereof, Credit Suisse will no longer issue new units of XIV ETNs.

Which is bad news for XIV holders, because as we showed last night, the NAV of the ETN crashed  to $4.22 yesterday from 108.36.