– 76 Illegal Immigrants Found Crammed Into Tractor-Trailer In Texas, Including 13 Children:

The agents pulled the truck over on U.S. Highway 83 to question the driver about his immigration status, according to the Border Patrol. Upon opening the rear of the trailer, 76 people from Mexico, Honduras, El Salvador and Guatemala were discovered – including 13 unaccompanied children.

The driver, who turned out to be a U.S. citizen, was arrested by Customs and Border Protection agents and had his truck seized.

“These criminal organizations view these individuals as mere commodities without regard for their safety,” said Gabriel Acosta, assistant chief patrol agent for the Laredo border patrol sector. “The blatant disregard for human life will not be tolerated. We will continue to work with our law enforcement partners to disrupt and dismantle these organizations and prosecute those responsible.”

The US Customs and Border Protection Agency has been stepping up efforts to curb illegal immigration – taking such measures as searching a record number of cellphones and other devices at US points of entry last year while hunting for smugglers and terrorists – much to the chagrin of the ACLU.

In fiscal year 2017, which ended Sept. 30, the government searched the devices of 30,200 people, the vast majority leaving the country, up from 19,051 in fiscal year 2016. More than 80% of the devices belonged to foreigners or legal permanent residents, with less than one in five owned by a U.S. citizen.

In this digital age, border searches of electronic devices are essential to enforcing the law at the U.S. border and to protecting the American people, said John Wagner, deputy executive assistant commissioner for the agencys Office of Field Operations. –WSJ

In early January, the agency released a new written policy outlining procedures for searching and seizing electronic devices at the border. The new guidance makes clear that agents can only examine information stored on the device, not data stored in the cloud thats accessible from the device.

Last year, the American Civil Liberties Union and the Electronic Frontier Foundation sued the administration on behalf of 10 US citizens and one legal permanent resident whose devices were searched or seized at the border. The groups argue in their suit that the government should be required to have a warrant to look at a travelers electronic devices.

Among the plaintiffs is a NASA engineer who said he was forced to unlock his phone and give customs agents access to its contents when he returned to the U.S. from Chile on Jan. 31, in the midst of chaos at airports from the fallout of President Donald Trumps original travel ban. Sidd Bikkannavar is an American-born engineer for NASAs Jet Propulsion Laboratory in California.

Last July, National Border Patrol Council President Brandon Judd told C-SPAN that a sharp dropoff in the number of illegal border crossers coming into the United States from Mexico is “nothing short of miraculous.”

As far as the Trump administration’s efforts on immigration, this is something they campaigned heavily on.

We have never seen such a drop that we currently have.

There’s a vibe, there’s an energy in the Border Patrol that’s never been there before in 20 years that I’ve been in the patrol.  –Brandon Judd via Washington Examiner

Judd went on to say that Trump’s two Executive Orders instructing border agents to fully carry out laws is in sharp contrast to the Obama administration, which kept agents from performing their sworn duties.

At the time Washington Examiner reported a 53% decrease in apprehensions at the Southwest border compared to 2016 – a 6 year low: 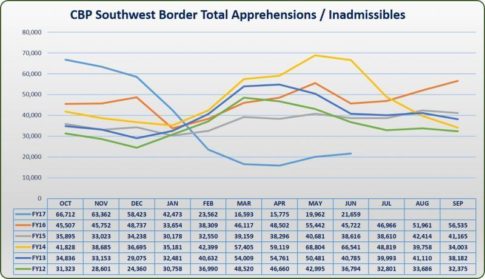 The NBPC President added that a southern border wall was necessary for select parts of the border, however he added that the entire border between the U.S. and Mexico does not need a full fence.