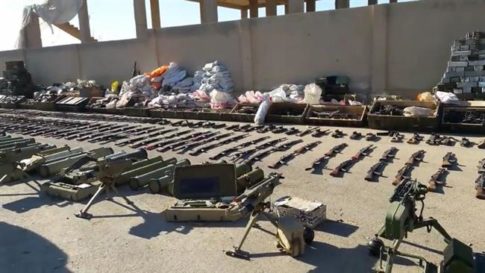 Syrian government forces have discovered a considerable amount of Israeli-made landmines, toxic materials and munitions left behind by members of Daesh Takfiri terrorist group in the eastern sector of the country’s eastern province of Dayr al-Zawr.

Syria’s official news agency SANA reported that army troopers made the discovery in the villages of al-Sayyal and Hassrat in addition to the town of al-Jalaa as they were combing the areas of hidden ordnance and unexploded devices.

This is not the first time that Syrian government forces have made such findings from terrorists’ hideouts across the war-ravaged Arab country.

A Syrian army commander, speaking on condition of anonymity, told SANA that the scale of the discovery is proof of the direct and systematic support provided to Daesh by a number of regional and trans-regional states.

Syrian military forces also discovered a large cache of Israeli-made weapons in the strategic town of Mayadin, located about 44 kilometers southeast of Dayr al-Zawr, on October 19.

The weapons included several types of heavy, medium and light firearms that beside Israel, came from some European countries as well as members of the NATO military alliance.

An unnamed Syrian military source said government troops had also found mortars, artillery equipment, large quantities of anti-armor munitions and a NATO- made 155mm cannon with a range of up to 40km (about 25 miles).

Syria has been gripped by foreign-backed militancy since March 2011. The Syrian government says the Israeli regime and its Western and regional allies are aiding Takfiri terrorist groups wreaking havoc in the country.

Who would have ever thought in a million years that israel was participating in injuring innocent civilians or supplying terrorist dogs of war with weapons of death?