Investing in ICOs – and the cryptocurrency space more broadly – has frequently been compared to investing in penny stocks, like those sold by Jordan Belfort’s Stratton Oakmont – the firm from “The Wolf of Wall Street.”

But this is a facile – though convenient – comparison. A more precise analysis of the risks associated with ICOs will find that most of more than 800 coins that have been created over the past 18 months will inevitably confirm that ICOs are far more risky than the average penny stock.

Indeed, incompetence and outright fraud aren’t just rampant in the ICO space: They’re the norm; even the largest – and purportedly most credible – ICOs – have been tainted by scandal. Offerings like Tezos, which raised more than $230 million and was backed by widely respected VCs like Tim Draper – have been hit with dozens of lawsuits from investors alleging negligence, embezzlement and fraud, according to Reuters.

By some estimates, up to 90% of these offerings will lose money for their investors.

Unlike stocks, ICOs face a singular risk: Their vulnerability to theft. Many investors in the DAO – a type of proto-ICO – lost a large chunk of their investment when hackers stole tens of thousands of ether tokens. At the time, the coins were worth $150 million: Today, their value has grown by orders of magnitude.

In a recent study, auditor Ernst & Young discovered that theft in the ICO space is even more pervasive than many had believed.

More than 10% of funds raised through ICOs are lost or stolen by hackers, according to a report about the risks of investing online. The firm examined 372 ICOs and found that about $400 million of the $3.7 billion raised to date had been stolen. Phishing – a relatively basic hacking technique where unwitting investors willingly turn over their information to hackers after being fooled with a false link.

Phishing was the most widely used hacking technique for ICOs, with hackers stealing up to $1.5 million in ICO proceeds per month, according to the report.

The research also noted that the volume of ICOs has been slowing since late 2017. Less than 25 percent of ICOs reached their target in November, compared with 90 percent in June.

The study comes amid a cryptocurrency investing craze, with young companies raising hundreds of millions of dollars online to fund their projects, with often little more than a handful of employees and a business plan outlined in a so-called “white paper”.

The challenges faced by more recent ICOs in reaching their targets are partly attributable to the lower quality of projects, as well as issues that have emerged around earlier projects, said Paul Brody, global innovation leader for blockchain technology at Ernst & Young (EY).

“The volume just exploded, people raised their fundraising goals and the quality just dropped,” Brody said in an interview.

“We were shocked by the quality of some of the white papers, we see clear coding errors and we see conflicts of interest between the companies issuing tokens and the community of token holders.”

E&Y also noted that investment flows into ICO tokens are often driven by “fear of missing out”, or “FOMO”, and have no connection to market fundamentals – though any Twitter or Reddit user could’ve told you that.

Indeed, “FOMO” has led investors to pour money into ICOs at record speeds, with the 10 shortest lasting ICOs attracting $300,000 per second on average. Many ICOs have seen the value of their tokens plunge this year amid a broader selloff in the crypto space.

Indeed, as we noted earlier today, cryptocurrencies have been on an almost uninterrupted slide… 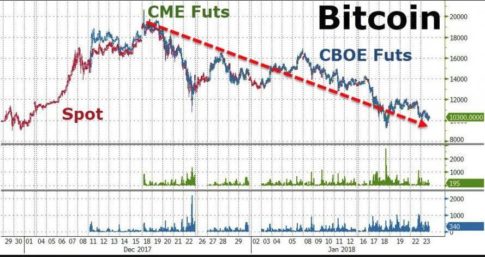