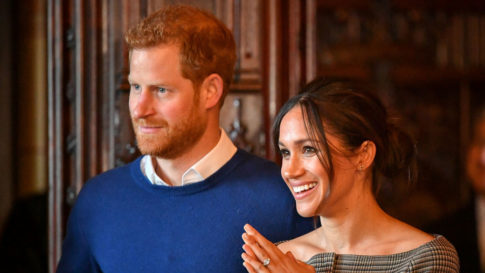 Police in Wales have been accused of “whitewashing” Cardiff after some homeless people claimed they were threatened with jail time if they embarrassed the city during Prince Harry and Meghan Markle’s royal visit on Thursday.

Cardiff charity Left Outside Alone reported that the homeless had been told they would face 14 days in prison if they were “seen sitting on [the] floor in town.”

@swpcardiff can you please tell me why our street sleepers are not aloud in town for hot meals once given a s35 dispersal order also telling them if they seen sitting on floor in town they face 14 days in prison.😡

Lou Thomas, a designer and illustrator from Wales, also took to social media to share her disgust over the police’s alleged threats.

“I just spoke to a group of homeless people in Cardiff town centre and was told they have been threatened with 14 days in prison if they are caught sitting on the ground in town today, apparently it won’t look good for the royal visit today,” she said.

I just spoke to a group of homeless people in Cardiff town centre and was told they have been threatened with 14 days in prison if they are caught sitting on the ground in town today, apparently it won’t look good for the royal visit today…. Anyone else disgusted?

The comment has been retweeted more than 200 times and inspired anger towards the police and local council.

“Given the chance I have no doubt they would [jail the homeless],” Thomas continued. “Royal or not, all should see what years of this conservative government are doing to people. There are more homeless people as a direct result of their policies. Councils are under pressure but should not hide the truth.”

One Twitter user replied: “I am thoroughly disgusted,” while another asked “How can it be illegal to sit on the ground?”

Another person added: “Yeah, let’s just whitewash the entire city while we’re at it.”

Cardiff Police were quick to respond to the concerns raised by Thomas, telling her that police have not been threatening homeless people with prison but have in fact been working with council to provide support to the homeless.

Yeah let’s just whitewash the entire city while we’re at it…why is there such a determination to hide the problems of our country from these extremely wealthy,privileged and dare I say it,scrounging royals!

“No prison threats from us,” the police spokesperson said. “The courts decide whether someone goes to prison.”

Welsh Police reiterated to RT on Thursday. They said police “are working with the council to help homeless people as part of an operation called Operation Purple Ash.”

Hi @LouThomas we are working with @cardiffcouncil to provide help & support to homeless people through #operationpurpleash No prison threats from us. The courts decide whether someone goes to prison ^ajh

Although Thomas thanked the Cardiff force for responding, she went on to blame the Conservative government for Wales’ homelessness crisis.

“Shouldn’t everyone, whether born with a silver spoon in their mouth or not see what years of this Tory government are doing to people?” she said.

I’m totally disgusted by the way homeless people are treated, how can it be illegal to sit on the ground?

“One homeless man I spoke to served in the army for 5 years – says a lot about how much the lives are valued,” she added.

The concern about Cardiff’s homeless is likely to be a by-product of recent comments made by Windsor council leader Simon Dudley.

Dudley called on police at the beginning of January to clear the streets of rough sleepers and beggars ahead of the royal wedding in May.

The Royal Borough of Windsor and Maidenhead councilor wrote to Thames Valley Police on January 2, calling called on authorities to enforce legislation stipulating that rough sleepers could be removed from the area ahead of the royal wedding.

“Jeezuss, how out of touch can you be, yet still be worshipped by the totally vacuous, moronic royal devotees?

Beggar’s belief….sorry about the pun.”