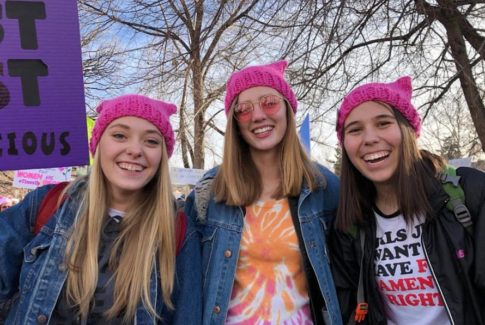 As 1000s of Women’s March protesters gather in cities across America on the one-year anniversary of President Trump’s inauguration, a class taught this spring at Ohio State University will review a parade of reasons why white heterosexual masculinity is allegedly problematic, tackling the topic from the constructs of racial issues, bullying, pop culture, societal expectations and much more, according to its syllabus.

The course, “Be a Man! Masculinities, Race and Nation,” includes a variety of readings to that end, including its required textbook “Dude, You’re a Fag!” by C.J. Pascoe, which analyzes masculinity as not only a gendered process, but sexual one, its Amazon description states.

The class is also expected to screen “Priscilla, Queen of the Desert,” the dashcam footage of Philando Castile’s murder, Key & Peele’s “Hoodie Skit,” and an episode of “The New Normal.”

The course is ultimately presented as a study in “feminist masculinity” that seeks to explain how ideas about masculinity “simultaneously harm yet privilege” men, the syllabus states. It also aims to explain how “beliefs regarding masculinity serve to justify certain kinds of violence by men against others, and violence against particular groups of men.”

Before outlining any academic criteria of the course, the syllabus states that the class meets “on land taken by force from Native Americans.” On the first day of the “Be a Man!” class in early January, students went over a “male privilege checklist,” according to the syllabus.

The course was created and is taught by Jonathan Branfman. Branfman is a doctoral candidate in Ohio State’s Department of Women’s, Gender, and Sexuality Studies and a recent recipient of a 2017-18 Presidential Fellowship, the most prestigious award given to students by the OSU Graduate School, according the the department’s website.

Branfman is also author of the new children’s book “You Be You!” intended for 7- to 12-year-olds that gives parents a “simple and accessible way” to introduce children to gender and sexual identity “in hopes of decreasing stigmas associated with the LGBTQ community,” the Lantern campus newspaper reports.

“It was really a result of teaching women’s, gender and sexuality studies classes at OSU,” Branfman told the Lantern.

“I often found myself thinking, ‘Wouldn’t it be great if everyone got really clear, unstigmatized information about gender and sexual diversity at a young age instead of them having to unlearn all kinds of harmful false ideas when they’re 12 instead of when they’re 20?’”

Branfman did not respond to requests from The College Fix seeking comment.

“The goals of this course are both scholarly and practical. On a scholarly level, students will trace the scholarly debates about masculinity, and understand how these questions have emerged out of feminist and queer research. On a practical level, this knowledge may help students to understand the ideologies they encounter in daily life. In turn, this understanding may help students to navigate the pressures, exclusions and violence they face in order to enhance their own wellbeing and others,” the syllabus states.

Never one to shy away from expressing his feelings, Paul Craig Roberts recently opined: Americans – especially white people who are the target of the deadly ideology of Identity Politics and are placed by the ideology in the same position as Jews in Nazi Germany and capitalists in Soviet Russia – are unaware of the extent to which Identity Politics is now the dominant force in American culture.

Initially, white males – such as the University of Virginia history professor on NPR who obligingly demonized the white males who do not accept their second class status – survive by mouthing Identity Politics and crawling on their knees. But this is a temporary respite.

For Identity Politics the only acceptable white heterosexual males are those who admit their gender and sexual preference guilt and accept their punishment for being the victimizers of women, blacks, and homosexuals.

As anti-white male propaganda is apparently the only mental activity of which the liberal/progressive/left is capable, America, broken into pieces by Identity Politics, is heading into civil war.

I wonder which side will control the nukes and bio-chemical weapons.

If the white heterosexual males lose, I wonder who will protect the white women. Are they destined for the same rape and butchery as befell German women from the Russians and Americans once the Wehrmacht surrendered?

Of course, this is an impermissible question.

Identity Politics always leads to violence, and Americans will not be spared.