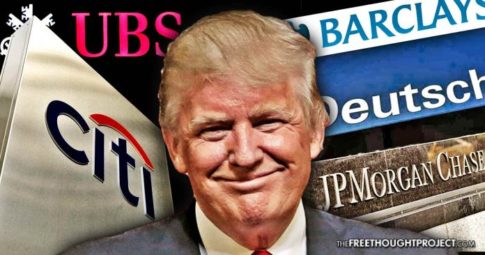 – As No One Watched, Trump Pardoned 5 Megabanks For Corruption Charges—Who He Owes Millions:

Trump followed in the footsteps of Obama and pardoned five megabanks—one of which he reportedly owes up to $300 million in outstanding loans.

While Americans celebrated the holidays, President Trump followed in the footsteps of his predecessors by acting in the interest of Wall Street and using the distraction to do something that was not in the best interest of the American people. He pardoned five megabanks for rampant fraud and corruption, which is especially notable because of the amount of money he owes them.

Trump has been using Deutsche Bank since the 1990s, and Financial Times has reported that he now owes the bank at least $130 million in outstanding loans secured in properties in Miami, Chicago, and Washington. However, a source told the Times that the actual number is likely much larger at $300 million.

Reports claimed that Deutsche was the only bank willing to lend Trump money after his companies faced multiple bankruptcies. The relationship has continued over the years, and an analysis from the Wall Street Journal claimed that Trump has received at least $2.5 billion in loans from Deutsche Bank over the last 20 years.

There have been concerns about Trump’s ties to the bank becoming a conflict of interest, dating back to the 2016 election, and the evidence to support those concerns is now becoming clear.

During the week of Christmas, the Federal Register announced that the Trump Administration had issued waivers to Citigroup, JPMorgan, Barclays, UBS and Deutsche Bank—all megabanks facing charges of fraud and corruption.

The banks were involved in the LIBOR Scandal, in which they colluded to deliberately depress the rate at which they paid out on investments. By suppressing the London Interbank Offered Rate (LIBOR) at the beginning of an economic crisis in 2007, the megabanks were able to boost their earnings and to give their customers a false sense of security.

Deutsche Bank pled guilty to wire fraud in a U.S. court in 2015, and it went on to pay $3.5 billion for its role in the LIBOR scandal—more than any other bank involved—before it reached a $7.2 billion settlement with the Justice Department in early 2017.

Then in June 2017, Deutsche Bank trader David Liew, who is based in Singapore, pleaded guilty to conspiring to spoof gold, silver, platinum and palladium futures in federal court in Chicago, confirming that the biggest banks in the world have conspired to rig precious metals markets.

While Trump granted 5-year exemptions to Citigroup, JPMorgan, and Barclays, and 3-year exemptions to UBS and Deutsche Bank, it should be noted that his administration is not the only one to have done this. As International Business Times noted, “In late 2016, the Obama administration extended temporary one-year waivers to five banks,” which just happened to be the same ones Trump has now extended the exemptions on—revealing the real rulers in DC.

Not surprisingly, the latest decision to pardon the banks comes in stark contrast to one of Trump’s most applauded campaign promises—that he would finally stand up against Wall Street and demand that the most powerful banks be held accountable to the public.

“I’m not going to let Wall Street get away with murder. Wall Street has caused tremendous problems for us. We’re going to tax Wall Street,” Trump said during a campaign rally in January 2016. 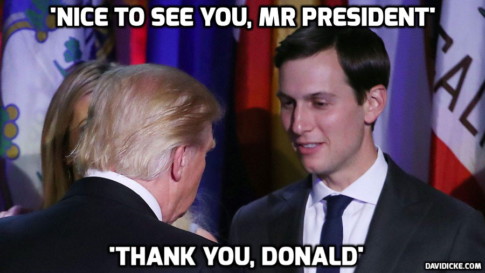 7 thoughts on “As No One Watched, Trump Pardoned 5 Megabanks For Corruption Charges—Who He Owes Millions”