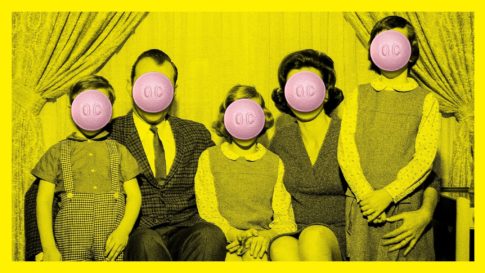 – The Secretive Family Making Billions From the Opioid Crisis:

You’re aware America is under siege, fighting an opioid crisis that has exploded into a public-health emergency. You’ve heard of OxyContin, the pain medication to which countless patients have become addicted. But do you know that the company that makes Oxy and reaps the billions of dollars in profits it generates is owned by one family?

The newly installed Sackler Courtyard at London’s Victoria and Albert Museum is one of the most glittering places in the developed world. Eleven thousand white porcelain tiles, inlaid like a shattered backgammon board, cover a surface the size of six tennis courts. According to the V&A’s director, the regal setting is intended to serve as a “living room for London,” by which he presumably means a living room for Kensington, the museum’s neighborhood, which is among the world’s wealthiest. In late June, Kate Middleton, the Duchess of Cambridge, was summoned to consecrate the courtyard, said to be the earth’s first outdoor space made of porcelain; stepping onto the ceramic expanse, she silently mouthed, “Wow.”

The Sackler Courtyard is the latest addition to an impressive portfolio. There’s the Sackler Wing at New York’s Metropolitan Museum of Art, which houses the majestic Temple of Dendur, a sandstone shrine from ancient Egypt; additional Sackler wings at the Louvre and the Royal Academy; stand-alone Sackler museums at Harvard and Peking Universities; and named Sackler galleries at the Smithsonian, the Serpentine, and Oxford’s Ashmolean. The Guggenheim in New York has a Sackler Center, and the American Museum of Natural History has a Sackler Educational Lab. Members of the family, legendary in museum circles for their pursuit of naming rights, have also underwritten projects of a more modest caliber—a Sackler Staircase at Berlin’s Jewish Museum; a Sackler Escalator at the Tate Modern; a Sackler Crossing in Kew Gardens. A popular species of pink rose is named after a Sackler. So is an asteroid.

The Sackler name is no less prominent among the emerald quads of higher education, where it’s possible to receive degrees from Sackler schools, participate in Sackler colloquiums, take courses from professors with endowed Sackler chairs, and attend annual Sackler lectures on topics such as theoretical astrophysics and human rights. The Sackler Institute for Nutrition Science supports research on obesity and micronutrient deficiencies. Meanwhile, the Sackler institutes at Cornell, Columbia, McGill, Edinburgh, Glasgow, Sussex, and King’s College London tackle psychobiology, with an emphasis on early childhood development.

The Sacklers’ philanthropy differs from that of civic populists like Andrew Carnegie, who built hundreds of libraries in small towns, and Bill Gates, whose foundation ministers to global masses. Instead, the family has donated its fortune to blue-chip brands, braiding the family name into the patronage network of the world’s most prestigious, well-endowed institutions. The Sackler name is everywhere, evoking automatic reverence; the Sacklers themselves, however, are rarely seen.

The descendants of Mortimer and Raymond Sackler, a pair of psychiatrist brothers from Brooklyn, are members of a billionaire clan with homes scattered across Connecticut, London, Utah, Gstaad, the Hamptons, and, especially, New York City. It was not until 2015 that they were noticed by Forbes, which added them to the list of America’s richest families. The magazine pegged their wealth, shared among twenty heirs, at a conservative $14 billion. (Descendants of Arthur Sackler, Mortimer and Raymond’s older brother, split off decades ago and are mere multi-millionaires.) To a remarkable degree, those who share in the billions appear to have abided by an oath of omertà: Never comment publicly on the source of the family’s wealth.

That may be because the greatest part of that $14 billion fortune tallied by Forbes came from OxyContin, the narcotic painkiller regarded by many public-health experts as among the most dangerous products ever sold on a mass scale. Since 1996, when the drug was brought to market by Purdue Pharma, the American branch of the Sacklers’ pharmaceutical empire, more than two hundred thousand people in the United States have died from overdoses of OxyContin and other prescription painkillers. Thousands more have died after starting on a prescription opioid and then switching to a drug with a cheaper street price, such as heroin. Not all of these deaths are related to OxyContin—dozens of other painkillers, including generics, have flooded the market in the past thirty years. Nevertheless, Purdue Pharma was the first to achieve a dominant share of the market for long-acting opioids, accounting for more than half of prescriptions by 2001.