Last month, S&P warned that UK lenders could incur £30 billion of losses on their consumer lending portfolios consisting of credit cards, personal and auto loans if interest rates and unemployment rose sharply.  Much like in the U.S., S&P warned that “loose monetary policy, cheap central bank term funding schemes and benign economic conditions” had fueled an “unsustainable” yet massive expansion of consumer credit that will inevitably end badly.

The rapid rise in UK consumer debt to £200bn from car finance, personal loans and credit cards is unsustainable at current growth rates and should raise “red flags” for the major lenders, ratings agency Standard & Poor’s has warned.

In detailed analysis of the sector, S&P warned that losses from this form of lending suffered by banks and other financial institutions could be “sharp and very sudden” in an economic downturn and may be exacerbated if the Bank of England increased interest rates.

It also warned that it could downgrade banks’ credit ratings if the high growth rate persisted or banks took on too much risk in this sector. But it did not fear any system-wide impact from consumer credit.

Annual growth rates in UK consumer credit of 10% a year have outpaced household income growth, which is closer to 2%, and become a focus for the Bank which is scrutinising lenders’ approach to the sector.

“We believe the double-digit annual growth rate in UK consumer credit would be unsustainable if it continued at the same pace,” S&P said.

Now, new data surrounding the growing number of court filings related to the recovery of consumer debts highlights just how serious the personal leverage problem has become in the UK.  As the FT points out this morning, there have been over 900,000 court judgements on consumer debts in just the first 9 months of 2017, up 34% compared to the same period in 2016, compared to only 827,000 at  the height of the great recession in 2008.

Consumers who refuse to repay their debts are increasingly being taken to court, with litigation at levels last seen in the run-up to the 2007-08 financial crisis.

New figures show there were 910,345 county court judgments in the nine months to the end of September. This is an increase of 34 per cent per on the same period in 2016, and compares with 827,000 in the whole of 2008, at the onset of the financial crisis.

The rise in court judgments is another indication of the high levels of unsecured debt weighing on British consumers, with Bank of England data showing that borrowing through credit cards, overdrafts and car loans has topped £200bn for the first time since the global crisis.

Although UK unemployment is at all-time lows, growth in real incomes and the savings rate have both deteriorated in recent months, suggesting household finances are worsening. Many economists are predicting a slowdown in what has been robust consumer spending.

This should come as little surprise to our readers as we pointed out earlier this summer that the U.K. auto market had seemingly taken a page from U.S. subprime lenders by offering a brand new car, with no money down, to anyone who walks into a dealership with a pulse (see: Undercover Investigation Exposes Deteriorating Auto Lending Standards In Europe; No Job, No Problem) . As the Daily Mail pointed out, their undercover reporters visited a total of 22 dealerships and were repeatedly offered cars of various values with no money down and despite reporters admitting that they had no job and no source of income.

Reporters visited 22 dealerships in England and Scotland, saying they were in their early twenties and either unemployed, on low incomes or trying to buy a car despite having poor credit ratings. Half of the dealerships – including ones selling Audis, Mazdas, Suzukis, Fords, Vauxhalls and Seats – told them they could have a brand new car without paying a penny up front.

In each case they were offered Personal Contract Purchase (PCP) deals – a type of car loan that now makes up nine out of ten car sales bought on finance in Britain.

A reporter who said he was working part-time on the minimum wage was offered a £15,000 Seat Ibiza without a deposit at a Seat dealership in Manchester.  Another reporter suggested that he had bad credit, but he was offered an £8,600 Vauxhall Corsa in Birmingham.

Kevin Barker, 71, found himself £3,500 in debt when he suffered a heart attack six months into a PCP deal. He said a ‘pushy’ Toyota salesman ‘pressured’ him into taking out a 36-month agreement in November 2014 and he was not told of the repercussions if he fell ill or lost his job. 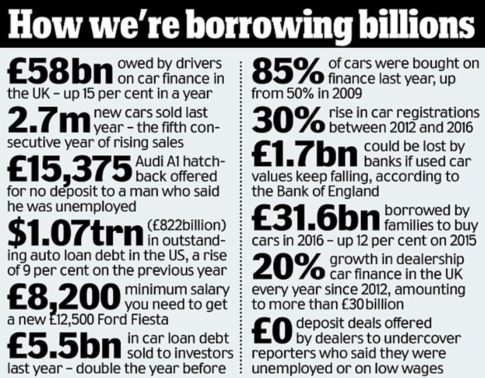 Of course, excessively levered household balance sheets work wonders for gaming GDP growth…that is, right up until the point that interest rates start to rise and those households realize their ability to “afford” their spending binge was nothing more than a temporary blip courtesy of accomodative interest rate policies…the reversal of which will now render many of them bankrupt.