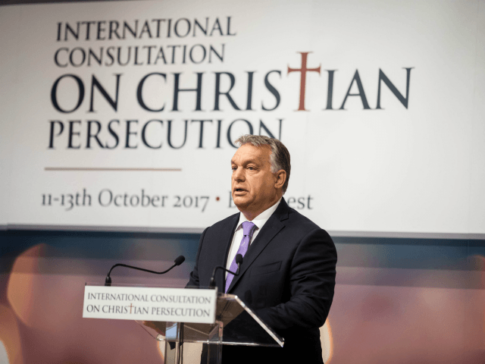 – Hungary Asks ‘Is Everyone Entitled to Religious Freedom Except for Christians?’ After Anti-Cross Ruling:

Hungary has offered to take a Christian cross which the French authorities say must be removed from a statue of Pope John Paul II in Brittany.

The courts had originally ruled that the entire statue, donated to the small town of Ploërmel by a Russian artist, must be torn down, but now say it may remain provided the cross is decapitated, prompting the mayor who received it to complain of “an attack on a part of our culture”.

The ruling has also caused considerable upset in the late pontiff’s native Poland, where he is revered as a symbol of Poland’s struggle to free itself from the Communist yoke by many, including the current government.

Hungarian Foreign Minister Péter Szijjártó told reporters that Budapest had contacted the town offering to arrange for the cross to be saved and transported to his country, where it would be received by the Saint Benedict Secondary and High School.

“Such measures must be regarded as attempts to do away with the continent’s civilisation and culture”, the minister warned, describing attempts to remove Christian symbols from public life in the name of tolerance as “astounding self-deprecation” and “hugely damaging”.

He added that large-scale illegal immigration was endangering Europe’s Christian nature and that newcomers less keen to abandon their cultural identity would overwrite local customs.

“These days we are seeing the emergence of issues that nobody previously thought could ever emerge, because irrespective of religious denomination nobody can dispute the fact that Christianity is a determining part of European culture,” he said.

“Is it really true that in 21st century Europe we are removing a Christian symbol? It everyone entitled to religious freedom except for Christians?”

A cross over the statue of Pope John Paul II “violates” the secular nature of France. https://t.co/litnJqM5k4

Szijjártó’s comments stand in sharp contrast to those of another EU foreign minister, Jean Asselborn, who has held his post longer than any of his EU counterparts.

Hailing from Luxembourg, one of the EU’s three major seats of power, along with Brussels and Strasbourg, Asselborn is a former deputy to President of the European Commission Jean-Claude Juncker, and articulated a decidedly different take on Christianity’s place in European culture during a recent interview.

“[I]f someone is concerned with protecting Christianity against Islam and therefore closing the borders and not letting anybody else in … You should just call it extremism,” he declared — suggesting the European Court of Justice should bring countries like Hungary and Poland to heel for not wanting to “open the door to refugees from the South, who speak Arabic and are Muslim”.

Hungarian prime minister Viktor Orbán has had strong words for EU leaders such as Asselborn in the past, telling a conference on Christian persecution that “the greatest danger threatening [Europe] today is the indifferent silence of the European elite who are renouncing their Christian roots, despite the fact that the fate of Middle Eastern Christians should wake Europe up to the fact that, no matter how unbelievable it may still seem, what happened there could also happen to us.”