After several failed Calexit attempts over the past several months (see: CalExit 3.0: New Petition Calls For Cali Secession…3rd Time’s A Charm?), tech billionaire Tim Draper is pursuing yet another major shakeup in the Golden State.  According to the New York Times, Draper is convinced that a state of 40 million people is simply “ungovernable” and has filed paperwork seeking a ballot initiative that would split it into 3 distinct states.

In contrast to the so-called Calexit movement, which aspires to secession, these proponents see California’s salvation in greater local autonomy within the union.

A third state, called simply California, would fold in Los Angeles and extend up the coast to Monterey.

What would having 3 Californias Solve?: A Proposal to Split #California Into Three: https://t.co/XQT1bKIrvq #population pic.twitter.com/Bv1N9UupY5

As Stanford geographer Martin Lewis points out, several ideas have been presented over the years on how to break up California into regions bound by an array of shared characteristics and history.  That said, per the map below from the 2016 presidential election, it’s clear that the real divide between Californians these days lies in the political divergence between the liberal coastal counties and the more conservative, agricultural countries in the interior of the state.

But Dr. Lewis said that another division had become ascendant in the minds of many residents. He cited the alienation of Republican-leaning counties like those in the far north, where the breakaway movement State of Jefferson has wide allegiance.

“It’s clear now,” he said, “that the real political divide separates the coastal counties from most of the interior counties.”

And while we’re sure this was not his intention, the map drawn by Draper would almost certainly result in 4 additional liberal seats in the U.S. Senate by grouping all of the red counties on the chart below with much more densely populated, liberal urban centers…how convenient. 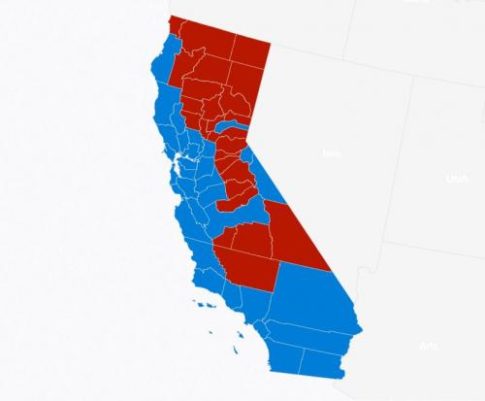 Of course, this isn’t the first time a split of California has been proposed and this attempt is probably about as likely to pass as all the previous failed attempts.

The proposal’s odds are extreme. Even if voters got behind it, the state Legislature would have to approve it, and then the U.S. Congress, which would have to be convinced to let blue California add four additional senators.

A few years ago, a bid to create six states out of California drew wide media attention but ultimately fizzled.

Still, it’s irresistible to ponder the idea of multiple Californias.

Martin W. Lewis, a geographer at Stanford University, said Mr. Draper’s plan was striking in its seeming disregard for regional identities. Monterey, for example, which looks toward San Francisco, would be unlikely to welcome its absorption into a state whose epicenter is Los Angeles.

“That just seems wrong to me,” he said.